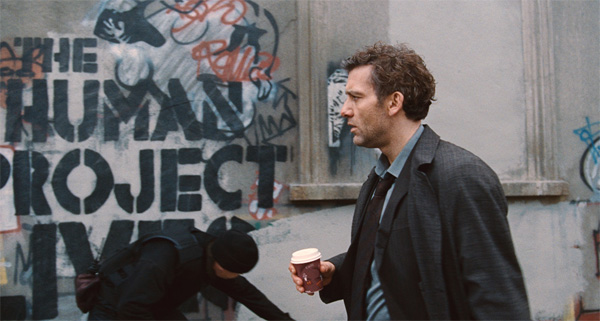 I will spare everyone the literary background and source material for the film – since I have not read the P.D. James source material of the same name, but the basic premise is that we are in a world (London in particular) in the very near (and way too familiar) future. The world is in shambles – chaos is the order of the day and only Britain soldiers on. As an additional layer to the film you have the matter of the world’s population no longer able to reproduce, thus ensuring the future of mankind. The reason why we never get an explanation for, but that doesn’t matter. It is only important because it drives the plot forward of what is an Odyssey-story at which the end game is the possible redemption of mankind. Here I choose my words carefully because “redemption” and words of heavily spiritual/religious implication runs consistent with yet another theme of the film (faith/chance). The religious allusions are hitting you from every angle which is why you may suffer from sensory overload in many parts of the film.

The acting by all principle and supporting actors was superb. Of particular note is the bombastic and yet still restrained tone of Michael Caine’s performance as the aged hippie/hermit who still seems to find hope in the human condition. Also of note:

And a repeat viewing – while the action goes by faster – it still engaging and compelling during the scenes of high tension and “chase” I still felt my heart racing.

During this second go around I watched it with my brother – who like many people – did not like the ambiguity of the ending. I beg to differ – that is the intent of the film. The future is up to all of us to decide.

Do not take my word for it; for an in-depth and very well articulated insight into this film, pick up a copy of the January/February 2007 edition of Film Comment magazine (http://www.filmlinc.com/fcm/fcm.htm). Back issues are available for purchase.