Today I have decided to give you a two for one deal. I saw Friends With Benefits a couple of weeks ago, but was saving the review for its official release. My delay in putting the finishing touches on it lead to the decision to combine the review with Captain America: The First Avenger which I saw on Sunday. 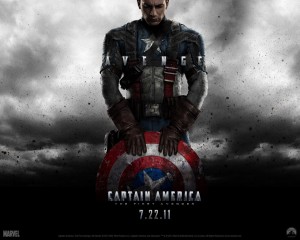 For the uninitiated, as the title states, Captain America is the first Avenger. In sort of a movie flashback, we see how Steve Rodgers, the 4F candidate becomes America’s “supersoldier.” During his latest attempt to enlist in the Army, he catches the attention of German scientist Dr. Erksine and eventually becomes part of the secret Army program that transforms him into our superhero.

At the same time we have the parallel story of the Red Skull (Hugo Weaving) who in a spilt from the Nazi regime takes the special weapons division of the Reich (Hydra) and suits it for his own evil purpose. You can guess what his ultimate objective is.

The convergent protagonist/antagonist stories lead a race against time for our heroes to save the world from a seemingly unstoppable force of evil.

Overall I thought the film was very enjoyable; one reason is the cast. In previous films, Chris Evans has always come off as being a bit of a flashy young hot shot. In Captain America, he plays the role of Steve Rodgers pretty straight and does a good job of it. Hugo Weaving is well, Hugo Weaving – no one does sly villainy quite the way he does. Tommy Lee Jones has many laughs in his role of the gruff, curmudgeonly army officer. I could go on and on but I think you get the point. It similar movies that are brimming with acting talent, it is very easy to get lost in the star count, but in Captain America, there is a very good balance. I must credit the direct Joe Johnston, who was able to get these performances out of his cast.

It would be foolish of me not to mention my favorite part of the film – the visual elements – set design, cinematography, costumers and makeup. I LOVE the vintage look and feel of the picture. I did feel like the production adequately evoked the spirit and look of the WWII era.

Nowadays, most pictures seem to run a minimum of 120 minutes, which can help or hurt a film. At 125 minutes, Captain America passes by at a solid pace and did not lead to much clock-watching on my part. That said a little more could have been to tighten up the story it did feel like some scenes were in just for the sake of it. But that is a minor quibble at best. Actually I have one more quibble – the fact (yet again) that the 3D did nothing to enhance my cinematic experience.

In the end, there is not much that could be done to ruin this film (for me). It is definitely a movie where I must simply take it for what it is – a decent comic book story, pretty well acted.

It is important to note that in the Marvel universe, this is the final film that will introduce us to the principle Avengers. We will next see Captain America and company in the $300million spectacle The Avengers set for release in May 2012.

HINT – stay for the ENTIRE credits and then some. 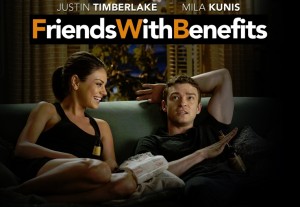 This Mila Kunis-Justin Timberlake starrer began a little shaky for me but at its conclusion, I must admit that I actually enjoyed it. I do not know why it pains me to say something like this, but funny is funny and this film had me laughing quite a few times. Granted it is not “This generation’s When Harry Met Sally” as I have seen it described in some promotional materials, but it was a light-heartedly entertaining movie.

As for the plot, it is pretty straightforward:

This of course s a slight variation on the When Harry Met Sally story in which the theme was that men and women CAN’T be friends because of the sex getting in the way. This film also has the misfortune of following the relatively poorly received No Strings.

This similarity is unfortunate because in spite of the oft-told theme, I was quite amused by this film. The leads obviously have chemistry especially as the movie moved along. The film’s saving grace for was courtesy of the wonderful supporting players, including Patricia Clarkson, Richard Jenkins and Woody Harrelson.

What seemed not to work for me however are elements of the film that you could tell were placed in the film for the sole purpose of getting a laugh. I speak particularly of the “film within a film” – its purpose is   to serve as a device by which we not only get cameos from the likes of Jason Segal and Rashida Jones, but is a send up of Hollywood’s bland treatment of film romance and New York City. The delivery ended up being a bit “blah” for my tastes.

Also someone who loves playing “I know that location” when watching films set in NYC, one thing that got to me was the jumping around between midtown, downtown and all around town in a relatively short period of time. If only it were that easy.

In conclusion, while not up there in my all time favorite rom-coms, I must admit that Friends With Benefits was definitely a pleasant surprise.

I would recommend this movie for: A girls’ night/date night out or in (home viewing).