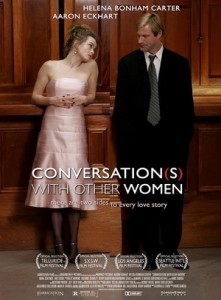 For this week’s selection I am moving a little forward in time – to 2005. This is a selection that may not go over well with many of my readers, but it is a film that in spite of itself I enjoyed.

Conversations with Other Women is a film which focuses on a meeting at a wedding between two people, portrayed by Helena Bonham Carter and Aaron Eckhart respectively. The conversation eventually leads up to Ms. Carter’s hotel room where all is revealed over the film’s 84-munite run time. In a series of flashbacks, we discover that there is more to this meeting than pure chance.

This is a very talkie “independently-spirited” movie that is to be sure. But like I said in the introduction, in spite of this cliche, I really did enjoy it. The principle reason for my enjoyment has to be the central performances. For most audiences Helena Bonham Carter is known to play “mad as a hatter” type roles. But here she proves to the audience that she is most assuredly an actor of great depth and nuance. Never that I was in doubt 🙂 I know that some people are not too wild about Aaron Eckhart but I like him here. In fact I like him in general.

Equally worth noting is that this film is Hank Canosa’s feature film debut. And with a budget of 450,000 USD, we are getting every penny’s worth.