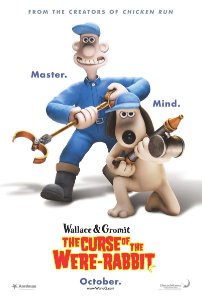 This week’s movie is a slightly tricky one for me. Wallace & Gromit: The Curse of the Were-Rabbit is an Academy Award winner, when upon its release, was number 1 in the US Box and maintained a worldwide number 1 for a few weeks after its release. So that begs the question – how could it be considered overlooked? Here is one reason:

I have been vaguely aware of the adventures of Wallace & Gromit, but my general impression is that W&G were not widely popular in America.

You do not have to be a fan of the series to get into the plot, but it might help to know a little background about Wallace and Gromit. In Curse of the Were-Rabbit, Wallace (voiced by Peter Sallis) is running a company called Anti-Pesto, which specializes in humane pest control. The annual vegetable competition at Tottington Hall is around the corner and the townspeople want to protect their veg from all forms of pest. Wallace soon gets a call from Lady Tottington (voice of Helena Bonham Carter) to handle her rabbit infestation problem. Wallace then gets the idea to use one of his “inventions.” The use of his Mind Manipulation-O-Matic appears to have been success; however, there is a “malfunction” that has rather disastrous consequences.

Also adding to Wallace’s problems is competition for the affections Lady Tottington in the form of Lord Quartermaine (voiced by Ralph Fiennes).

This film was part of a 5-picture deal with Aardman Studios signed with DreamWorks studio (included the 2000 Chicken Run and the 2006 digital animation Flushed Away). I have also heard anecdotes and read that DreamWorks was trying to pressure Nick Park and Steve Box to make some changes — to which they did not succumb. Due in part to the “modest” success of this film in the domestic box office and the aforementioned creative differences between the studio and the filmmakers, the partnership ended in 2007.

I found this to be a very entertaining in spite of my general reservations to full length animated features.

Incidentally, I would also recommend the following Wallace & Gromit adventures:

If you have seen it let me know what you think.