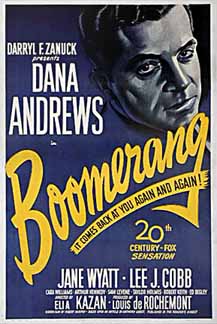 A long time ago in what seems a different life, I wrote a review of this early Elia Kazan picture. If I am able to locate it I will update this week’s post to include it.

In the meantime, I did not want the opportunity to pass without extolling its virtues:

As previously stated, this film is based on a true story of a 1920s case in suburban Connecticut; however for narrative purposes the film is moved up the present day 1940s. One evening, a beloved priest is killed in cold blood. Suspects are thin on the ground, which does not bode well for the local political leaders. As a result, a large scale manhunt takes place, eventually leading to the apprehension and extradition of disaffected war veteran John Waldron (played by Arthur Kennedy).

What looks like an open an shut case (thanks to Waldron’s confession – the result of sleep-deprivation delirium), leaves Dana Andrews’ Henry L. Harvey with doubts. In classic bucking against the system fashion, Harvey begins to look back at the people, places and events surrounding the investigation to deconstruct what exactly happens. It is this information that he presents to the judge and audience (not going to give away the ending :)).

The documentary-styled elements are always a draw for me when looking at crime dramas of this decade. The drama of the narrative blends seamlessly with the more overarching documentarian aspects of the film.

With respect to the acting, as I have already stated, Dana Andrews delivers. But he is bolstered by an equally stellar supporting cast which includes Arthur Kennedy, Lee J. Cobb, Jane Wyatt, and an always reliable Sam Levene.

So if you like films such as my previously-mentioned The Naked City, I suggest you find this film and watch it.

Also be sure to visit Todd Mason’s blog for more overlooked titles.