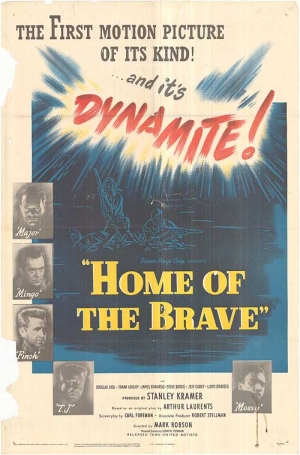 This week’s selection may  come across as a bit dated especially by today’s standards, but in 1949 it was somewhat ahead of its time. It is the Stanley Kramer-produced Home of the Brave.

Stanley Kramer was know as “Hollywood’s Conscious” in that he either directed or produced films that brought awareness to some social ill, injustice or championed the plight of society’s “underdogs.” If you are familiar with any of the films, you will know that even at the time of their release, they created strong reactions – and not always in the way that Kramer anticipated.

His film credits include:

In the case of Home of the Brave, the problem addressed is that of racism in the face of the horrors of war; this is a slight deviation from the original play’s addressing the issue of Antisemitism.

The plot deals with a black WWII veteran, Pvt Peter Moss (James Edwards) who has been paralyzed in combat. As part of his treatment, he is undergoing psychoanalysis. Via flashback, we see that he is wracked with guilt a the loss of a lifelong buddy (portrayed by Lloyd Bridges). This overhwleming guilt is compounded by the racism he encounters while on duty. These factors play a major role in his lack of progress in recovery.

The film’s goal is to probe these issues to the point where we (hopefully) see Moss overcome and prevail.

I recommend this picture mainly out of reminiscence of watching this with my late father; he had the knack pulling up a rare movie of this bygone era of cinema.