This year let’s go for the TREAT, shall we? In previous posts I have mentioned My Tales of Terror, and recommended Cat People. This year I am in a rather jovial mood, so I have decided to take a look at the “lighter” side of cinematic Halloween fare …

Arsenic and Old Lace (1944) – previously mentioned in Cool Off with the Classics meme. If the word ZANY was ever used in the right way, it would have to be to describe this film.

Ghostbusters (1983) Who ya gonna call? I remember seeing this back in the day 1.5 in the theater. This was at a time when you did not get kicked out of the movie theater. I remember so clearly. Halfway through the second showing my brothers, my cousin and I snuck into see the end of Star Trek: The Search for Spock.

The Little Shop of Horrors (both versions!) The 1950’s version is worth seeing merely for the glimpse of a young Jack Nicholson!

Wallace and Gromit: Curse of the Were-Rabbit (2005) – another one that has gotten a previous mention on my site.

The Devil and Daniel Webster – part of Double Feature Theatre. Lesson: NEVER make a deal with the devil, especially now that Daniel Webster is around to help argue your case!

The Trouble with Harry – this list would not have been complete without a nod to Alfred Hitchcock! This is one of the lesser-known outings from the Master of Suspense. It is equal parts funny and macabre. As the poster explains, this is quite an unexpected offering from Hitchcock. 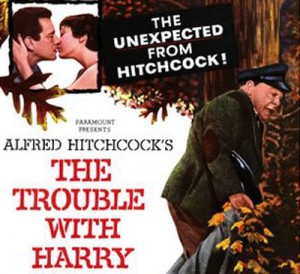 Then of course there is the Rocky Horror Picture Show, which I will not count because … I have not seen it all the way through in one sitting. But I have seen the Glee episode. Same goes for Shaun of the Dead.

What films for Halloween do you really enjoy (in the fun way)? Please add your comments below.