This was originally scheduled to go out last month but alas, time apparently does not stand still while you are trying to get on with the business of your life. In any regard, this post is the latest entry in my continuing look at some the classics that Universal Studios has given the cinematic world in its landmark 100 years.

Today I will be taking a quick look at To Kill a Mockingbird, the moving adaptation of Harper Lee’s novel. Before I get into particulars, let me state for the record: I have not read the source material; I have made at least two wholehearted efforts to do so, but given my history of not completing novels, it should not be entirely surprising. Also, I have not seen the film is quite a while so my recollection of the finer details of the plot should not be heavily relied upon. 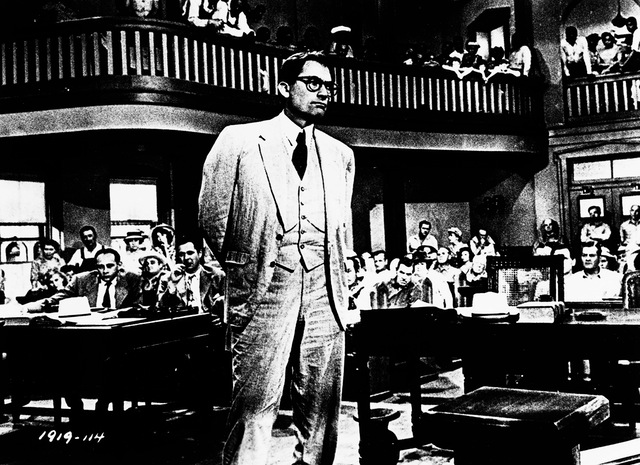 For those who have not seen this film in the 50 years since its initial release, it has become a stalwart representation of American cinema at its very best, often appearing on several “all time” lists.

Adapted for the screen by noted playwright and all around wordsmith Horton Foote, and with memorable performance by one Gregory Peck (as Atticus Finch – AWESOME name BTW), the film is seen through the eyes of his daughter Scout, played by Mary Badham and son Jem (portrayed by Phlip Alford). Atticus is a lawyer in the fictional Maycomb, Alabama, who is tasked with defending an innocent black man, Tom Robinson (Brock Peters); Tom has been accused of raping a young white woman. The ensuing trial shatters the wide-eyed naivety of Scout and Jem, who for the first time, are seeing the ugly side of humanity in the form racial prejudice and injustice.

I almost find it hard to put into words Peck’s performance in this film, mainly because I find it hard to summarize a characterization of a man whose morality is unflappable in face of all that surround him. He is a Superman for the Everyman, I guess. In fact all the players (including Robert Duvall in his film debut) resonate with an authenticity and sincerity that draw you in and keep you captivated throughout the story.

Again director Robert Mulligan proves that he was quite masterful at telling the “small-town American story” with a lovely, sentimental heart.

That’s me done: have you seen this film? What did you think about it?