Maybe it has to do with the turning of the calendar to the brisk month of October, but I am would like to share an atmospheric, moody film from 1947, a thriller titled The Red House, starring Edward G. Robinson and Dame Judith Anderson. 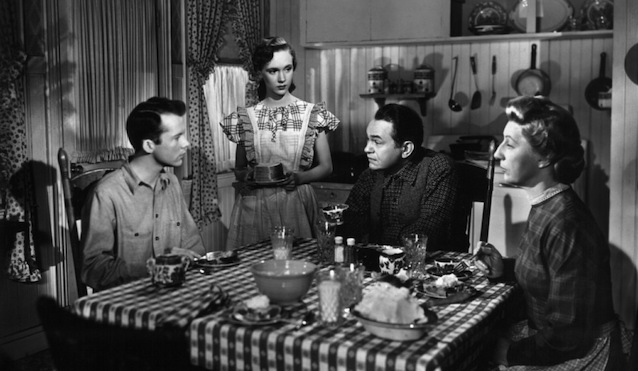 Pete (Robinson) and Ellen (Anderson) have reared Meg (Allene Roberts) as their own, ever since she was a baby and her parents took off. Now a teen, Meg convinces her friend Nath (Lon McAllister) to come help with chores on the farm: Pete isn’t getting around on his wooden leg like he used to. When Nath insists on using a short cut home through the woods, Pete gets quite agitated and warns him of screams in the night, of terrors associated with the red house. Curious, Meg and Nath ignore his warnings and begin exploring. Meg begins falling in love with Nath, but his girlfriend Tibby (Julie London) has other plans for him. Meanwhile they all get closer to real danger and the dark secret of the red house.

Not mentioned in this synopsis is the appearance of character actor Rory Calhoun, who plays an enigmatic local drifter. For fans of films from this era, the names Calhoun, London, and of course Robinson and Anderson should be all too familiar. How they ended up in this small, independently produced film is anyone’s guess but the film ends up being all the better for it. There is a mystery to be revealed, and frankly, you will probably be able to figure out what secrets the red house holds before you should. No bother – it is an enjoyable enough film that will pass a cool, fall day (or night) in.

Check out the opening couple of minutes in the following clip and if that gets your attention, there are many copies of it available for viewing on a host of video streaming services:

Finally be sure to check out other overlooked or forgotten gems on Todd Mason’s Sweet Freedom blog.
Have a great Tuesday everyone!