Pleasantville is a 1998 film starring Tobey Maguire and Reese Witherspoon as a brother and sister tandem who could not be any different. One day they are arguing over what to watch; they subsequently break the television and have to call a TV repairman (D0n Knotts) to fix it – yup in 1998 there were still TV repairmen who showed up at your door.

But I digress – Don Knotts the TV repairman leaves them with a remote that transports them to the B&W picturesque world of Pleasantville, home of a popular 1950’s television program. In the real world it would be like one of us being transported to Mayberry (The Andy Griffith Show), or better yet the town from Leave it to Beaver. Everything appears to be perfect but as you can expect but the introduction of the modern day brother/sister starts to change the town. This change is represented by the world of Pleasantville slowly being converted into color. 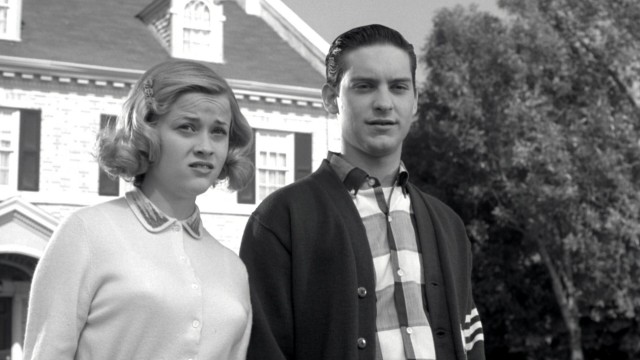 The clever use of “B&W vs. color” cinematography, as well as the revisionist social commentary on the era are two of the highlights of the film that appealed to me. Oh yeah, and the cast is not too shabby either – in addition to Maguire and Witherspoon, rounding out the awesome cast are Jeff Daniels, Joan Allen, and William H. Macy.

Have you seen the film? If so what do you think about it?

Also be sure to check out my friend Todd Mason’s blog for more “overlooked” titles.