There is something about baseball that translates so well to the silver screen – especially when it is a story well told. Sure, as I have gotten older, my interest in the national pastime as a spectator sport has been supplanted by the tennis and international football (soccer), but when it comes to sports on film, I would say nothing beats a good, nostalgic baseball tale.

Last week, I attended a special screening of the Jackie Robinson biopic 42.

For even the most casual of sports fan, the story of Jackie Robinson breaking baseball’s color barrier transcends the realm of sports history and is now woven into the fabric of the larger American story. But for the sake of context, it may help to go into a little more detail –

42 chronicles Robinson’s (played here by newcomer Chadwick Boseman) early years as he works his way from the Negro Leagues, to the minors and finally spans his rookie season with the Brooklyn Dodgers in 1947. The film also examines Robinson’s relationship with his wife Rachel (Nicole Beharie), his Dodgers teammates and Dodger General Manager Branch Rickey (Harrison Ford).

What resonated for me was watching a man who understood what his presence meant at this particular place and time in history; the burden he shouldered with an almost unconscionable, dare I say, “superhuman” amount of resolve is something I could not even imagine. 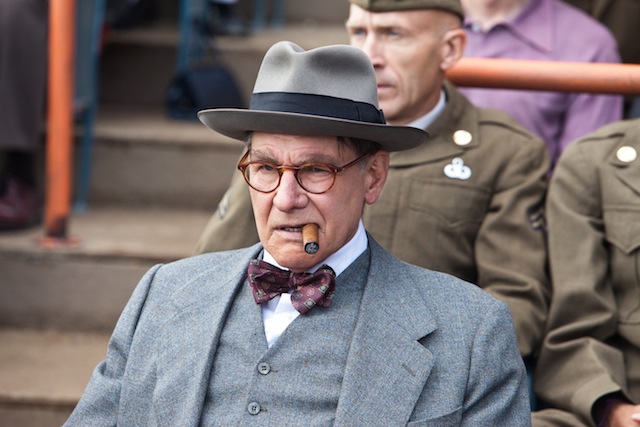 I have read where some suggest that the sentimentality spin and old fashioned structure of the film will not work for everyone. My retort? Au, contraire! I think given the setting and central story being told, this style of the film is just right.

It would be remiss of me not to mention the performances – across the board, they were good. I would like to serve special notice to Chadwick Boseman filling the shoes of a legend.

So you may be wondering what made this screening special? Well, in attendance was no other than fellow Mount Vernon-ite and Robinson teammate Ralph Branca, who participated in a post-screening question and answer session in which he talked about growing up in Mount Vernon, NY and his remembrances of playing with and being in the locker room with Jackie Robinson.

This story (and all that surrounds it) holds a special place in my heart – it is yet another cinematic reference that brings to mind my beloved dad. Raised along the eastern seaboard in cities like Baltimore and New York, he spent his formative years Brooklyn, attending Boys High School and being a die hard Dodgers fan. Even when the Dodgers “betrayed” their fans and fled to the greener pastures of Chavez Ravine (Los Angeles, CA), pops continued to follow the team from a distance. As a teacher and lover of African American history Jackie Robinson’s story had immeasurable impact (I imagine) on his life and that was passed on to us.

Have you seen it? Let me know what you think by posting your comments below.