For more titles be sure to visit Todd Mason’s blog, Sweet Freedom.

My selection this week came as I was passing through the channels over the long holiday weekend. My movie-loving blogging colleague Ruth of Flixchatter, has recommended this film many times over and I just never got around to watching it. The film I am talking about is the 2000 romcom/dramedy Return to Me starring David Duchovny and Minnie Driver, directed by Bonnie Hunt. 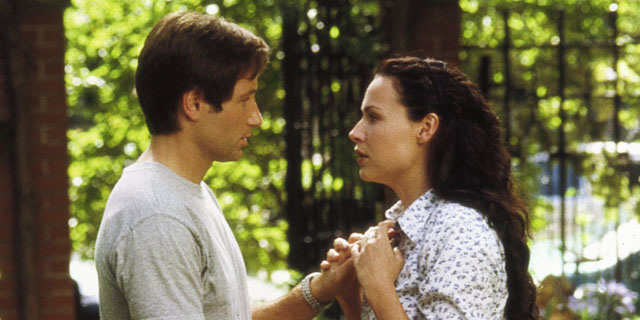 If ever there was a human transplant story to make you laugh, cry and ultimately feel romantically fulfilled, this is it. On the one hand, the grief and heartache (literal and figurative) are so pronounced – the combination of: the tragedy of losing a loved one, the agony, anticipation and hope of receiving a life-saving gift and a new lease on life is balanced with the most subtle yet effective comedic touches.

Everything about this film works for me: the setting, the characters (and the wonderful cast who portray them), and the music. It’s a shame that Bonnie Hunt has not directed more feature films. I think I might start a petition of something.

On a slightly sadder note, Return to Me also marks the final film appearances of both Carroll O’Connor and Dick Cusack (father of John and Joan).

For a more thorough look at the film (from several angles), I refer you to Ruth’s site.