I may not be the most die-hard, but I most certainly consider myself an Austen-ite. I have read and love many of her books, as well as enjoyed many of the film adaptations. I even enjoy those films outside of the Austen cannon – the television programs Lost in Austen and Death Comes to Pemberley immediately come to mind. So you can imagine my excitement when I discovered that there would be a new addition to the Austen-verse coming to a big screen near me late last year. Although I did not see it when released last summer, I recently caught up with the rom-com Austenland on video. 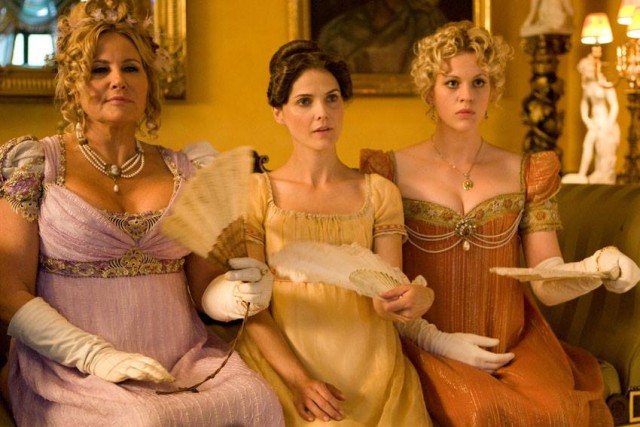 Co-authored by Jerusha Hess and Shannon Hale, directed by Hess and produced by Stephanie Meyer (yeah, the Twilight vampire lady), Austenland is the tale of 30-something Jane (Kerry Russell), who apparently like more than a few women of her generation, holds up Pride and Prejudice (and Colin Firth as Mr. Darcy in particular) as ‘the ultimate’ romantic ideal. Her personal life in shambles, she decides to indulge this romantic fantasy of hers by booking a trip to Regency-era England and the pleasures of Austenland – a resort for fans of Ms. Austen where visitors are treated to live out their fantasy of being a heroine in a story of their own making. For some additional fun, a group of actors has been enlisted to interact and engage with the guests; it is cosplay at its most ‘refined.’

As one would expect, there are romantic entanglements, intrigues, twists and turns throughout the remainder of the story.

Before I get into the nitty-gritty, full disclosure – I have not read the source material. That said, I would not pass up the opportunity, for the concept of the story sounds like something that would interest me.

However, after seeing the film, I get the sense that something went missing or got lost in translation during the course of adapting the text to the silver screen. Many of the scenes felt empty and disjointed. The acting was not bad, but the characterizations seemed more often than not to fall into caricature, thus leaving me with no one to root (or not) for. But maybe that was the point, especially for the actors within the story that were playing along with the guests. I don’t know really, because frankly, I was not compelled to think too hard on it; I just felt ‘meh’ about the whole experience. Even the ‘outtakes’ credits fell flat for me.

Overall, I think my disappointment in Austenland was compounded by my earlier anticipation. Seriously, I was looking forward to a light, entertaining comedic confection that would provide me with a fresh Austen fix. But as the credits rolled, I went back to thinking of all the Austen-themed films I have enjoyed over the years and soon after, rewatched the 1995 version of Persuasion to remind myself of what I loved (and missed).