Home Reviews Did Guardians of the Galaxy Cure Me of My CBMFS*?

It came on so suddenly that I initially did not even recognize what was happening. Many good, some bad, but this spate of comic book movie adaptations started to feel like an assault on my cinematic sensibilities ultimately leading to a malaise, and overall indifference from one movie to the next.

This past year this May to be exact I experienced the rather acute symptom of skipping out on X-Men: Days of Future Past. Now THIS was a rather anomalous event for me, for two principle reasons — 1) It’s an X-Men film and 2) probably more telling, Michael Fassbender stars in it. On a Venn diagram, those two factors would generally be enough for me to go fetch. Not this time …

But you are wondering, I suppose, how would the full onset of CBMFS affect my viewing of Guardians of the Galaxy this weekend? Let me preface this by saying, early signs did not look promising – all the marketing and promotion for the film totally missed me. So much so that I could not clearly recall to you any trailers or “features” I saw in the build up to its release. 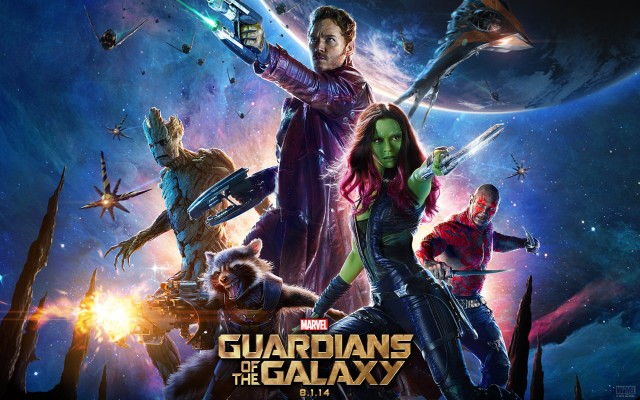 A fact I now think may have played into my response to the film – in brief, this was possibly the most enjoyable installment the Marvel universe has delivered. It was an entertaining mélange of humor, drama, a healthy hint of romance and throngs of pulse-pounding action. And if you were to strip away these layers, there is a heart and sentimentality that rendered the film’s characters whole beings. In other words, a complete package.

The unlikely leader of this band of misfits is Peter Quill, played by Chris Pratt. He is a Terra (Earthling), who after tragedy occurs is taken to the far reaches of the galaxy. The only remnant of his terrestrial existence being his Walkman™ and its accompanying mix tape, and an as-yet opened package and note from his mother.

His latest mission is to acquire an orb, which we are soon to discover is a great deal more powerful than he (or we could ever) imagine. Enter Gamora (Zoe Saldana), sent by baddie Ronan (Lee Pace) and über baddie Thanos (Josh Brolin) to retrieve the orb; Groot (voiced sparingly by Vin Diesel) and his more talkative companion Rocket the Raccoon (voiced by scene stealing Bradley Cooper), a tag team seeking the bounty for the capture of Quill. Rounding out the Guard squad is strong man Drax, played by wrestler David Bautista.

As I reflected on the film post-screening, I realized this quest/object is not the whole story, it’s just the modern day Macguffin – the thing that the players care intensely about, and the audience may struck curious about, but ultimately is a distraction from what really matters – the characters and their personal journeys. This is what was so personally affecting for me about Guardians. Everyone has a story that is punctuated by the sense of loss and personal tragedy. Yet here they are, these ‘losers,’ on a mission for a much greater good. That is why, while I understand the need for continuity with the rest of the Marvel universe, I think more than anything, Guardians stands apart from the pack as being wholly unique and standalone.

That achievement is impossible to accomplish without the aid of some serviceable scribing and performing. Co-credited with the writing honors are this film’s director (James Gunn) and Nicole Perlman, the first female screenwriter in the current Marvel cinematic franchise – make of that what you will.

In addition to the entertaining central performances I listed previously, there is the supporting cast of characters that made this a most enjoyable trip to the movies. I was planning on pointing out a noteworthy performance here and there, but soon realized I was simply reciting the IMDB cast list.

As for the music, both scored and that courtesy of the Star Lord’s awesome mix tapes is, as I friend of mine mentioned, a welcomed character in its own right.

So back to the start – am I cured once and for all of my CBMFS? The answer is an ever-ambiguous I’m not absolutely sure. But what I am sure of is that Guardians of the Galaxy is a really, really good film that I recommend others see before the summer passes.