Home Commentary What Are They Playing At? Fox and the Fantastic Four

First off, hope everyone is having a happy Friday. Maybe the weekend means you will be headed to the cinema, maybe not. If it is the former, chances are it will not be to see the latest “reboot” of the Fantastic Four cinematic franchise. Not only do you have these kind of tweets floating around …. 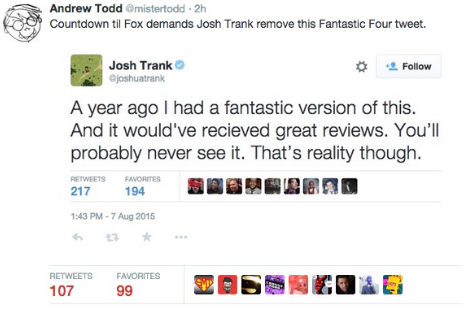 (in case it is not clear, this is the director of the film)

… but early reports clearly show that the box office receipts are going to be anything but fantastic. Which begs me to ask, “Why is Fox continuing to do this?”

I guess I could go into detail about the dubious history of this Marvel-sourced property, but it’s been a long week so I will just point you in this direction. 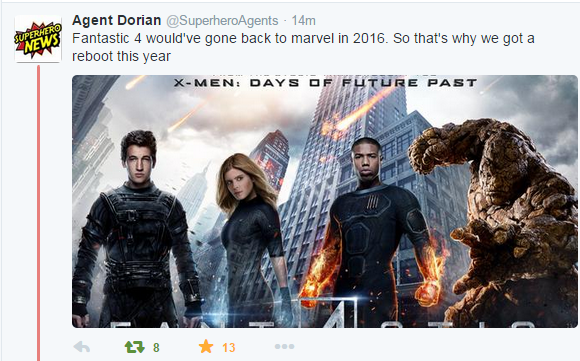 So even if the constant reboots/re-imaginings are simply for the reason of keeping the Fantastic Four a 20th Century Fox property, what is the end game here? The results since Fox has owned the rights have been mediocre at best. Why not produce a quality product and really invest in the storytelling, much in the way they have gone all-in with the X-Men universe? Maybe I am showing my source material naïveté here, but I am simply flummoxed and left with more questions than answers, as is evident.

Then the thought comes to me, maybe Fox is thinking long term and pulling a Sony Pictures and what they did with Spider-Man – after what many considered a recent and unnecessary reboot, the execs did the math and realized it was not worthwhile to keep the property. What DID make sense in this case was to cut their loses, turn good ole Spidey back over to a now very solvent Marvel Studios, and cash the check.

If Fox is attempting to make a similar play in seeking a cost-justified reason to dump the Fantastic Four franchise, they are going about it in a very curious way. Because as the poor reviews keep coming in and the box office tanks, there is a great deal of damage done to the Fantastic Four brand, which I would guess devalues it and ultimately places Marvel in the catbird’s seat, allowing them to reacquire the rights at a cost that will not allow Fox to recoup their loses. And then there is this. A curious business indeed.

I have been talking about this situation in personal correspondence with friends, family and my friends over at Super Hero Movie Talk. It has made for a very lively discussion. Now I am turning it over to you all – what do you think?