So yeah, Captain America: Civil War (CA:CW) has been out for well over a week and double yeah, I did see it opening weekend.

Just thought I would take a moment to share with you some of my collected thoughts from my screening a couple of Friday nights ago.

ILC’s Overall Take? I really liked it. As much as I am generally fatigued by this whole superhero movie franchise “thing,” I have to say I truly had a fun time and was thoroughly entertained. 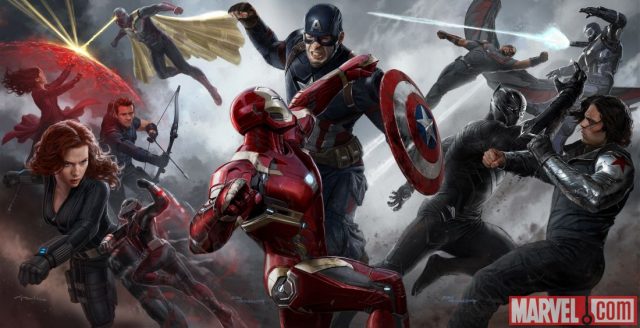 Here are a few key things that made the film a pleasure to watch (no rhyme of reason to the order):

The “heart” of the story …: At the center of the story is the friendship between Cap (Chris Evans) and Bucky (Sebastian Stan), a relationship which was firmly established way back in the first film. And it doesn’t stop there. This idea of fealty and loyalty also extends to the ties that bind our merry band of Avengers.

Also at the core of what creates the central conflict in the movie is each character’s response to dealing with the consequence of their actions. Though a very brief scene in the beginning of the film, CA:CW enlists the talents of Alfre Woodard to portray a mother who confronts Iron Man/Tony Stark (Robert Downey, Jr.) about her son, who was part of the “collateral damage” in the wake of the Avengers’ crusade to “protect” the world. The question then becomes at what cost? It is worth noting that there are a few more poignant moments which reiterate this theme.

It’s a balance: While the above themes are heavy, they are presented in a way that does not weigh the film down. Which leads me to this next point – CA:CW did not forget its funny bone. Unlike other comic book adaptations (that shall not be named here – LOL), the Russo Brothers get it – what should not be lost in bringing this action to the screen is a sense of fun. I mean there are people running around in all matter of spandex and stretchy fabrics for goodness sake.

A lot of this levity comes by way of the introduction of the Incredible Spider-Man (Tom Holland). His exchanges with Tony Stark are especially wonderful and light hearted.

Now, if there is one criticism I will levy with the whole Spider-Man arc is the “Benjamin-Buttoning” of Aunt Mae (Marisa Tomei). Won’t go into too many details about this, but I felt the need get it off my chest.

Well … The Civil War: Without going into explicit detail, the extended action sequence which shows our superheroes going toe-toe with one another was well worth the price of admission. At no point did I feel bored with what I was watching.

A very solid introduction to T’Challa (Black Panther): I really do not know where to start or end with this but wow! What an intro! What I appreciated about it was that is was not overly bombastic, but we were given enough to recognize that this was a character (Chadwick Boseman) that is going to be important in the Marvel universe built by Feige and company. There was just enough background information given to leave the audience intrigued for what is next to come. And yeah, he looks pretty bad ass.

And in the past week, the frenzy has just started, with the twitter hashtag #BlackPantherSoLit trending with the latest casting news which has both Lupita N’yongo and Michael B. Jordan attached to the Black Panther standalone. Black Panther is scheduled for release sometime in 2018.  #WeAreWakanda indeed.