Home Television Definitely Binge-Worthy: The Get Down (2016)

As I get my act together regarding building my television presence online (better late than never I guess), I will use this established space to wax poetic about my latest televisual, or ‘Netflix-ian’ obsession.

Actually, when I think about it, this post is not that far off from the theme of my blog.  The program that I will be discussing has a cinematic tie-in, courtesy of Baz Luhrmann, who is one of the creators of this awesome project. I am speaking about the 6-part limited series The Get Down. 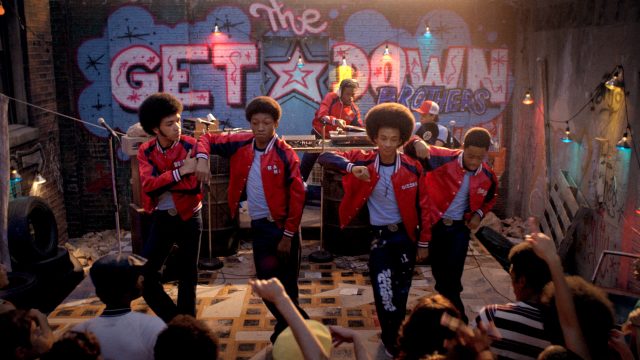 At the start of Episode 1, it is a certainty that our chief protagonist, Ezekiel ‘Zeke’ Figuero, (Justice Smith) has made a success of himself – we see this in the structure of the story – we have snippets of a contemporaneous, narrative performance by an adult Zeke (Hamilton’s Daveed Diggs) that immediately cut back to the South Bronx, 1977 – the primary setting for our story. Zeke and his crew – Shaolin Fantastic (Shameik Moore), Marcus ’Dizzee’ Kipling (Jaden Smith), and his brothers RaRa Kipling (Skylan Brooks),  Boo-Boo Kipling (T.J. Brown, Jr.) traverse the urban landscape, propelled by the lyrically-gifted Zeke, who is using his penchant for composing a mighty fine verse as a vehicle to fly high and escape his present circumstances.

There is also the burgeoning love story between Zeke and Mylene Cruz (Herizen Guardiola), a young lady who is also trying to break free from her surroundings and the strict religious upbringing through the power of her voice. Her saving grace of sorts is her loving uncle Francisco “Papa Fuerte” Cruz (Jimmy Smits) who also happens to be a big cheese around these parts – he seems to have his hand in everything – from community development to music producing.

I think I should probably pause here because I really feel like I am giving a whole lotta plot away. But that is the thing. Over the nearly 6 hour run of the series a lot of stuff is happening, often simultaneously. But the storytellers do a really good job of structuring the story and the movements of the characters in such a way that you don’t feel overwhelmed. And sure Zeke, is the central figure in the machinations of the plot, but to be honest, this is an inspired, ensemble piece where no character is wasted.

Musically, the audience is treated to a blend of the nascent days of hip hop music (cheers to Nas, who I believe also is actually pitting the verses that adult Zeke performed), the glorious days of disco and club music which bellowed in the nightclubs and dance halls of New York City.

Nevertheless, I am not saying that it is a perfect or exacting recounting of the South Bronx of the late 1970s – one that is generally characterized as being mired in urban blight. As one would expect, especially in the first episode (directed by Luhrmann) it is given a ‘Luhrmannian’ luster, vibrancy, grandeur and escapism that were very not much markers of the era if you were living it.

But for all the glamor and glitz, there does lie a raw undercurrent that conveyed the times as they were – from wanton acts of violence and the sense that everything may not turn out the way the audience would want or expect, there is enough forbidding present to create a sense of unease.

Plainly stated, The Get Down is worth your eyeballs. It is Netflix’s costliest production to date and while the buzz around it (from what I have seen) is largely positive, it is not getting the streaming traffic that would probably make Netflix happy given the expense. Which is a shame.

In a world where we continue to bang on and on about representation of all manner of story being told and covering the multitude of the human experience, this is a story worth telling and worth being seen.