Maybe somewhere buried in this blog (or maybe not), I have talked about my unwavering love of music from the 1980s. Hands down and without a doubt it is a favorite period of mine. Just talking about the sounds of the era automatically fill me up with a sense of nostalgia.

I guess some of my friends know me and my penchant for this period well enough because it is a mate of mine who recommended I watch the film I will be discussing (Sing Street). And boy, I am very glad I took her up on her recommendation 🙂 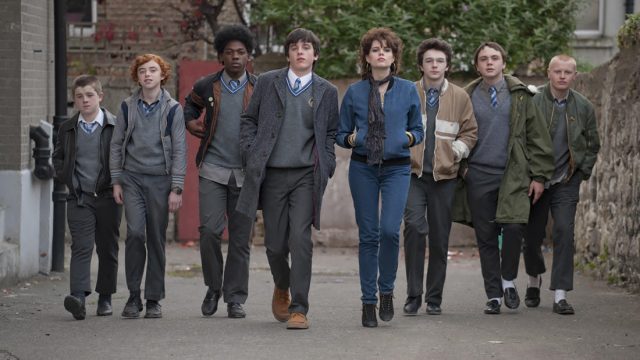 Sing Street, which made its premiere at the 2016 Sundance Film Festival, is written and directed by John Carney (Once, Begin Again). Set in 1985 Dublin, this musical/drama/comedy tells the story of teenaged Conor (Ferdia Walsh-Peelo), whose life is turned upside down when he is told by his parents (Aiden Gillen and Maria Doyle Kennedy) that due to money problems, he will have to leave his tuition fee-paying school and enroll in a local state (free) school, Synge Street CBS (Carney was a former pupil here).

Almost immediately, he finds himself on the wrong side of things with the school bully (Ian Kenny) as well as with the hard-nosed school principal, Brother Baxter (Don Wycherley).

At the same time, Conor makes an immediate connection with a beautiful yet mysterious young woman, Raphina (Lucy Boynton); he attempts to win her over by asking if she would like to feature in his band’s music video. Only problem? He doesn’t actually have a band – well not yet anyway. Conor uses this moment to set in motion the formation of a band (named “Sing Street” of the title), comprised of a few of his classmates. At the start, they primarily cover 1980’s pop songs. Then at the recommendation of his ne’er do well older brother Brendan (Jack Reynor), himself a self-proclaimed music aficionado, Conor decides to take up the task of producing original music with fellow bandmate and instrumentalist extraordinaire Eamon (Mark McKenna).

I think I will stop here in terms of providing you all with a plot synopsis 🙂 What follows is an inspiring story which has its fair share of laughter, drama, and joy. Sing Street has a heart and musical soul that will remain with you well after the credits roll.

And speaking of music – major props to the composer Gary Clark for the work he did on this film. His original music wonderfully captured the tones and the sounds of the era as they accompanied the songwriting efforts of John Carney, Ken and Carl Papenfus (of the Northern-Irish band Relish), Graham Henderson and Zamo Riffman (Source: Wikipedia).

In addition to this original music, Sing Street also features songs from established acts including The Cure, A-ha, Duran Duran, The Clash, Hall & Oates, Spandau Ballet, and The Jam. And in case you are wondering, YES – many of the songs did make it onto the Original Motion Picture Soundtrack.

As I mentioned in my previous post recapping 2016, Sing Street was one of the highlights of my moviegoing year.

If you love music from the 1980s and are intrigued by “small” stories that are “big” with emotional resonance, then I cannot recommend Sing Street highly enough.

Have any of you seen this film? What did you think of it? Hit me up in the Comments section below.