My thoughts on Lee Chang-dong’s Burning (버닝; Beoning) has been sitting in my drafts for a minute now. A recent realization that it is now available in digital format inspired me to get on with it and complete the thoughts I jotted down a few months ago. 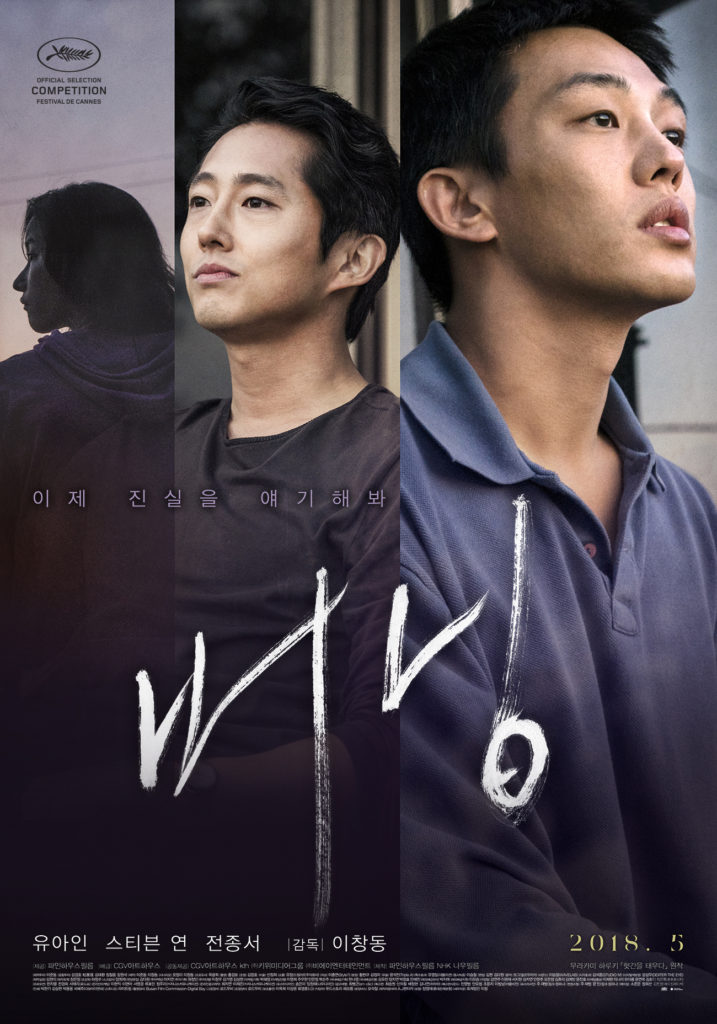 Based on Haruki Murakami‘s short story Barn Burning, the story is transplanted to South Korea and moves between the “worlds” of Seoul and Paju. The proximity of the latter city definitely lends itself to the overarching feeling of foreboding and coldness which resides over the film’s proceedings.

It is here that the audience is introduced to Jong-su (Yoo Ah-in), a seemingly withdrawn young man who drifts for labor to labor. Jong-su is also an aspiring writer whose primary influence is American author William Faulkner. One day, he runs into a childhood acquaintance Hae-mi (Jeon Jon-seo) – she is presented as a very spirited, adventurous young woman. Their chance encounter eventually develops into a relationship. The only problem? Hae-mi’s imminent departure abroad. She leaves soon after, assigning Jong-su the responsibility of feeding her cat while she is away. Although the cat is unseen on his frequent visits to Hae-mi’s apartment, Jong-su dispatches with the task dutifully.

Some time has passed and Hae-mi eventually returns home with a new “friend,” the suave and cosmopolitan Ben (Steven Yeun), with whom Hae-mi connected while stranded in Nairobi, Kenya. Jong-su’s affection for Hae-mi initially portrays itself as envy for the couple, but as Ben ingratiates himself to Jong-su, he (and the viewer) start to pick up clues which indicate that all may not be what it appears to be.

This is the point that I stop the synopsis. Telling you anything else will spoil the masterful storytelling that director Lee has set up for the audience. As we move through the narrative with Jong-su as our eyes and ears, the tension in every subsequent scene builds and builds, making the audience question if all that they see and hear is to be believed.

When I say it was masterful, I mean it. As I journeyed further, I became acutely aware that every look, every word spoken, every single detail was something I had to pay close attention to. In its worst form, a process like this can prove to be a ponderous one. However, and in spite of the 148 minute run-time, in Burning you WANTED to discover more to get closer to solving the mystery. You are carefully presented a puzzle that you meticulously assemble, piece by piece, until you reach that point where you get up, stand back and marvel at the completed picture.

Of course, this is not a task to be accomplished alone – from the writing (Lee & Oh Jung-mi) to the cinematography (Hong Kyung-pyo) and cast, Lee has assembled a group of collaborators that executed this film with aplomb. Of particular note is the performance of Steven Yeun. I think my natural inclination was to attach myself to Ben due to our connection as Westerners (the actor and the character). The casting and the portrayal work perfectly since they add to that sense of not knowing which way the story was going to turn. There were a number of striking notes in his performance where I was I left questioning myself and my own perceptions.

It also makes me wonder how South Koreans viewed Ben in the film – is he someone who is to be immediately trusted or is he a person who elicits the opposite response?

If You Haven’t Guessed, You Should See This Film

As I mentioned at the outset, Burning is now available in digital format. I highly encourage any and all to see this wonderful, mysterious psychodrama which, upon reflection, is one of the better mind***** of my recent movie memories. There is really no excuse to not see this deliberate, slow-burn of a film which will leave you in awe.