Last night I finally got a chance to see Peter Yates’ Bullitt starring Steve McQueen. Well when I say that I watched it, frankly I watched it until ….. the scene:

…. and shortly thereafter left the remainder of the film on as background while I whiled away yet another Friday night.

I have heard about how this car chase is one of  the greatest ever filmed; I knew I had to see it for myself. Even though I am not a vehicle enthusiast, I do enjoy the tension that often accompanies watching a scene in movies where cars are involved.

It should come as no surprise then that this scene lived up to and somewhat exceeded my expectations. What I particularly loved about it was the back and forth – the cat and mouse of the chaser becoming the chased and back again. What really got me going was the close up of one of the baddies buckling his seat belt early on in the action sequence. I thought to myself “Oh yeah this is going to be AWESOME.”

In terms of points of comparison, I will reserve judgment since it has been AGES since I saw The French Connection and its iconic car chase scene.

This did however get me thinking about other films whose scenes of tension involved automobiles (not limited to car chases per se). It should come as not surprise that many of my choices are from Alfred Hitchcock works:

In many of Hitchcock’s works, a lot of credit goes to his frequent collaborator, composer Bernard Herrmann, whose scores built just the right amount of tension and suspense with the audience.

There are a couple of car-related moments of tension that I have experienced while at the movies, but I am drawing a blank as to specific titles. There is one scene in particular that freaked me out when I was a child. The scene involved some sort of zombie or demon on the front of a car being driven by a woman. The lady in question is zig-zagging across a road at night and in a heightened state of panic. The only other part of the scene I remember is pointy gate, whose purpose I do not clearly recall but in hindsight can only assume at some point is used to dispose of the zombie/demon thing.

But I digress, what are some of your picks? 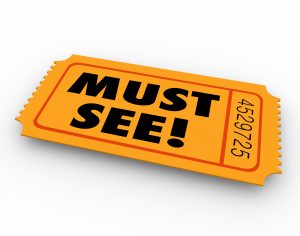 This list is separated into two parts – a top half and a lower half. The top portion (items 1-60) is a non-sequential list of films which I deem to be “the best” of the medium based on their excellence in the following four areas:

Furthermore, the film has to be one in which I can accurately recall the general plot AND have seen the film in one sitting (i.e. watched it from beginning to end, no interruptions).

The second half, or lower portion of the list are films that may very well meet the criteria as stated above but I have yet to see them. Some may surprise you, others, not so much.

This list is a bit more dynamic that the upper portion and I will try my best to constantly update it as I knock films off the list. I will then replace the watched title with another film I have in reserve.

For purposes of clarity, both lists will not feature documentaries and will focus only on narrative films.