Home Archives for 50 Shades of Grey

Plenty of thoughts swirled through my fatigued brain in the lead up to the release of 50 Shades of Grey.

First, full disclosure – I read ALL THREE books, of which the first is the basis for the film released last weekend. The experience can be best described as incrementally less excruciating.

“WHY iluvcinema?,” you may be asking. I guess I am a glutton for punishment …

So after investing so much time in wading through the prose, I initially said NO NO and thrice NO to even entering the cinema and watch it all play out onto the screen.

But as time wore on, my natural human curiosity got the best of me, and I bit.

What follows is an attempt to sort out my rambling and disparate thoughts. Enjoy!

Best foot forward, people. Apparently, the filmmakers must have had certain reservations concerning the source material because what we get from this big screen adaptation of E.L. James’ novel appears to be an attempt to right some of the crimes against literature and sexual politics the source have been accused of. This effort in the end, produces a film that is much better than anyone can expect it (or will it) to be.

“Cleanup in Aisle Three.” It is clear that the director Sam Taylor-Johnson and screenwriter Kelly Marcel tried to clean up the possessiveness/stalker tendencies of our male protagonist, Christian (Jamie Dornan). Unfortunately, this was not totally achieved as a few set pieces involving Christian’s “persistence” (term used advisedly). Whereas in the novel these set pieces definitely added to the creep factor – so much so they felt more at home on the Investigation Discovery channel than in a “romance” novel – in my screening at least, these moments produced a fair share of chuckles. To the film’s credit, the female protagonist, Ana (Dakota Johnson) seems aware of the oddity of these actions. Which leads me to …

Oh, Ana …  the character of Ana, in the film, is given more agency and control over her circumstances. I do wonder if it was in the notes or not, but Johnson seemed to catch the essence of her cinematic alter ego well enough, given its head banging-inducing origins.

Not worth the price of admission? This film MAY disappoint some readers who enjoyed those “edgier” (snicker) elements of the book, of which, I take or leave personally. But for those seeking it out, maybe that is the worst crime of the film – it just is not a provocative as some might anticipate. Just something to ponder.

Yet another lesson in “Hollywood Commerce 101.” As the opening weekend box office proved (tracking at nearly 300 million worldwide at the time of this writing), regardless of any well-founded protestations, the book made boatloads of money and was going to get made by an industry that was simply looking at the bottom line. Also note that the film is rated R, intended to garner as much mainstream appeal (and promise of sequels) can.

Oh – and on a final, more cynical note, the product placement was AMAZING.

In the end, I would say more like 50 Shades of Much Ado about Nothing or 50 Shades of Meh. I highly suspect if not for the troublesome origins of this story, the final film product of 50 Shades would very easily be dismissed into the ether of “sexy” drama, albeit with a bigger budget and some recognized talent behind it (I see you Marcia Gay Harden and Jennifer Ehle). So by no means a masterpiece, this is the closing bit of advice I am offering: 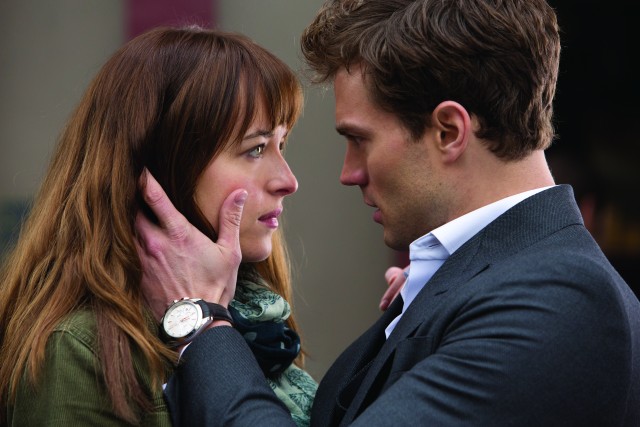