Some time ago i mentioned I saw Brian de Palma’s 1976 homage to Hitchcock’s Vertigo, Obsession and was not a fan of it.

One thing I failed to do was give a full on review laying out my disappointment in the experience.

As a theme it is a tough sell in so many ways. Of course many folks generally do not feel comfortable with it as a general rule of thumb. Should it not be addressed as a topic? I am not saying that at all. What I take exception with how it is handled in this movie is that I am supposed to believe that he does not know that this is his daughter or that there is some biological connection between he and she?

I find that a little hard to accept. Especially since his daughter was kidnapped and never seen for a number of years. I guess the conclusion to possibly be drawn from that (and I am sure the filmmaker will agree) that he is so blind with obsession over the memory of his dead wife that he cannot fathom this as a possibility. Me? I am not buying it.

Homage is one thing…

Maybe some think that it is clever that de Palma uses a similar cinematically literary device, the idea of the double, the reveal in the middle of the film and the protagonist as the pawn – all central elements in both films but somehow more effective in the master’s work.  I think to model one’s own work after someone you admire is slightly double edged. And while you admire someone sometimes it is best to simply mention your admiration or refer to it (with a wink and a nod) in your own style. So while I may be in the same boat of admiration as De Palma, I think that some things are better left undone and not to be replicated.

Maybe I will give it another go…

For the sake of my love of Hitchcock’s Vertigo I will go back and re-watch Obsession, but be warned I am already slightly put off by it so a major epiphany will have to wash over me if my mind is going to be changed.  This second chance is something that I gave vertigo which I admit was a film that was a bit over my head when I first watched it on VHS.

In the end movies like all works of expression and art are pieces that inspire diverse reactions in many people. Also one’s idea of the creative or artistic evolves and morphs over time. So maybe, in time, I will come to see Obsession as De Palma would want me to see it.

Set your DVRs. During the month of November, TCM’s Star of the Month is none other than Grace Kelly. Although her film career was remarkably short:

Almost all of her performances are memorable. Her collaboration with Hitchcock in three of films put her in select company for actors who had repeat performances in his film (Grant, Stewart, Bergman, Fontaine, Peck to name a few).

Of course a great part of hear legacy has to do with her leaving Hollywood to marry Prince Rainier and preside over the principality of Monaco until her untimely death in 1982.

But this Barbie Doll is one featuring a film from my favorite director … Alfred Hitchcock! I already have the Alfred Hitchcock Edition of the game Clue, so what better way to augment my fantastic collection than with this: 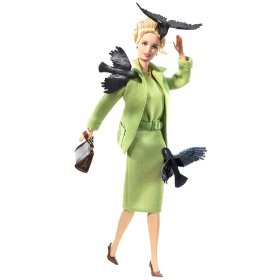