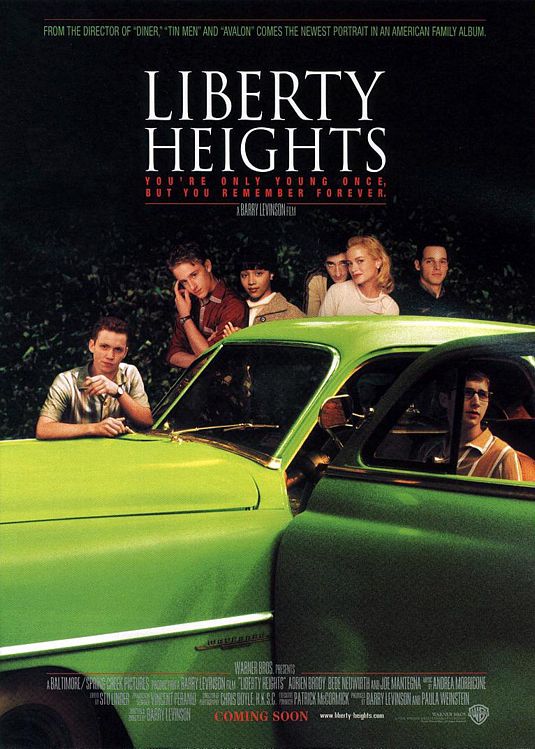 Let it be known: I love coming of age stories. Yes they can be rather saccharine and mind-numbingly formulaic at times, but for me that is sometimes the appeal of the pictures. We are all guilty of looking at our youth from a romanticized perspective, although we will swear up and down that our recollection of these events are exactly as we say they are.

My selection from this week’s overlooked film – Liberty Heights (1999) tends to tell its story a little bit straighter but that does not make it any less enjoyable. In fact, that is one of the appealing aspects of the film for me, especially since it is not a period in I know about first-hand.

What I find so fascinating about this period of time in America is mainly what I have learned from history. Underneath the surface of suburban tranquility, there lied an undercurrent of an impending social and cultural upheaval. So it is interesting in looking back at a time that is not part of my life experience through the eyes of someone who lived it.

The eyes with which we view this world through are those of Barry Levinson, director of The Natural, Rain Man, and Good Morning Vietnam to name a few. In Liberty Heights,  Levinson manages to strike a balance between presenting his tale to a knowing audience while also showing the world his characters inhabit as they lived it. Put another way, what often happens with period pieces is that there is some revisionism in how much the characters are self-aware that they are a part of something greater. Of course in reality, we don’t live our lives in that greater context; most of us go about our lives just trying to make the best out of what is laid out before us.

The plot: the story is a semi-autobiographical tale of Levinson’s experiences growing up in a Jewish suburban neighborhood in Baltimore, circa 1954. We are drawn into the parallel stories of Van and Ben Kurtzman (portrayed by Adrien Brody and Ben Foster respectively). Van is in college and Ben (our primary protagonist) is a high school student.

Ben’s school has recently been integrated and he quickly finds himself intrigued (and attracted) to a new African American female in his class. You probably know where this story goes from there … Meanwhile, Van has an encounter with a mysterious blonde who he instantly falls for.

There is also a subplot that deals with the Kurtzman patriarch (Joe Mantegna) and his less-than-above-the-board dealings. This storyline in particular did not interest me as much, but its presence is a part of the plot development.

This film plays on two levels – the racial politics surrounding desegregation as well as the class politics of Van’s burgeoning relationship with an “All-American” girl. But like I previously stated, what makes this story watchable is that in spite of our “knowing” the context in which all the action is taking place, the characters are not absolutely operating in the know (if you catch my meaning).

While there are a couple of things about the film that left me a bit ambivalent, on balance, I enjoyed watching it.  In other words, a minor Barry Levinson film is better than some of the best offerings of other directors out there.

Oh yeah and the soundtrack is pretty good too (if you like 1950’s rock ‘n roll).