This week’s entry as part of Todd Mason’s weekly internet meme, Overlooked Films, is a Gothic/romantic mystery from the mind of Daphne duMaurier, who most notably penned Rebecca and The Birds, which were both adapted into films by Alfred Hitchcock.

When Philip Ashley’s much-loved (and rich) cousin Ambrose dies, he is convinced that Ambrose was murdered by his new wife Rachel to inherit his wealth. But when he meets Rachel and falls in love with her, he knows that his suspicions must have been unfounded. But were they, or is Rachel just trying to use Philip to get at the estate Ambrose left to him instead of to her? And will she murder him next? 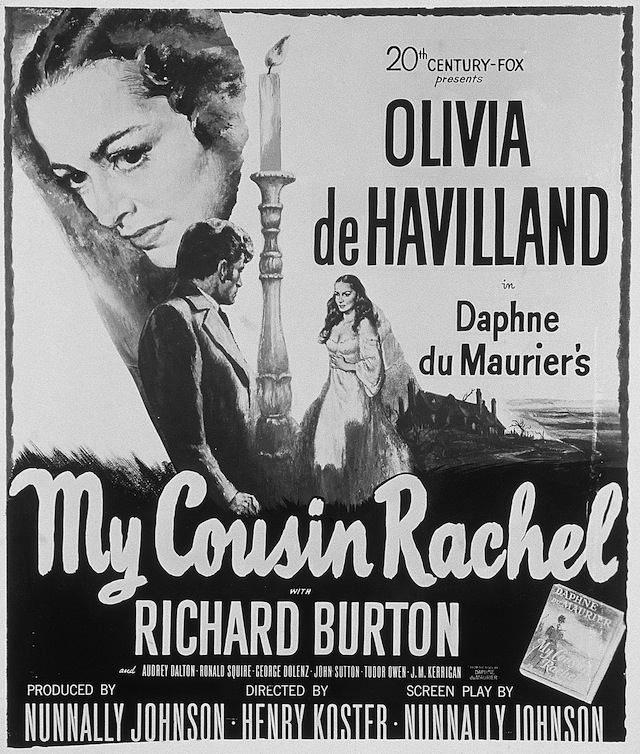 This adaptation was directed by Henry Koster (The Bishop’s Wife) and stars Richard Burton and Olivia deHavilland as the aforementioned Philip Ashley and Rachel, respectively.

The visuals of are wonderful at capturing the atmosphere of the rugged Cornish coast; that combined with Franz Waxman’s film score lends a proper air of  suspense and foreboding to the proceedings.

Overall it is an enjoyable watch, and perfect for a blustery, if not rainy weekend afternoon 🙂

EGADS Looks like I will be dreaming of Manderley again!

Imagine my surprise when I found out that one of my favorite books of all time, Daphne Du Maurier’s Rebecca, which in turn became a 1940 film directed by one of my favorite directors, Alfred Hitchcock, was getting a cinematic remake/reboot.

In case you have not read the book or seen the 1940 Hitchcock film, here is a very brief synopsis:

A young bride is terrorized by the memories of her husband’s glamorous first wife.

And here is the trailer for that film:

While not considered a quintessential ‘Hitchockian’ thriller, this film marked Mr. Hitchcock’s first Hollywood studio production and went on to win the Oscar for Best Picture of 1940.

Now that you have a little background information, tell me:

Who would you like to see cast in the title roles of the unnamed author, her new husband, Maxim de Winter, and most importantly, the maid Mrs. Danvers?