In my final cinematic recap for Sundance 2014, I would like to take a look at the film Dear White People. 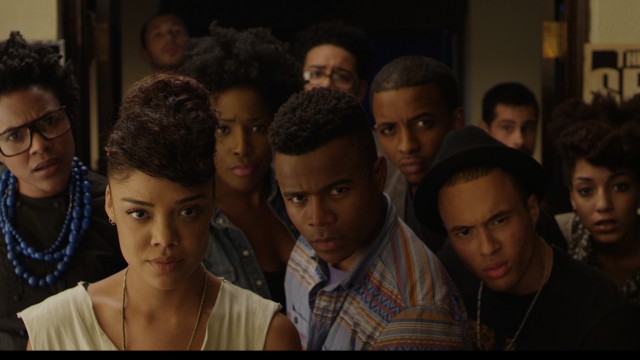 Dear White People is the directorial debut for Justin Simien, uses the setting of a fictional elite university to examine issues of racial identity and conflict in a ‘post-racial’ America.

The film looks at the dynamics of various subgroups on the campus by focusing the dorm life of the predominantly African American Armstrong/Parker house and contrasting it with the “establishment’s” university humor magazine The Pastiche. The interaction within and between these two organizations sets the stage for increasing tension and conflict that culminates into a major incident that touches all of the main characters.

Speaking of characters, instead of looking through the lens of one principal character, Simien wants to challenge our perceptions by creating a multi-protagonist story, meaning that at any given time, the narrative is being controlled by a different character or set of characters. Projecting the narrative from these various points of view is a clever device that takes the edges off of a sensitive topic, allowing the film to accessible to a diverse audience.

For the most part, this tactic works. While I obviously am not able to relate to every single perspective, based on the strength and ability of the performance, I was more or less convinced of where the various characters were coming from. Although the depth of character development for some characters slips at times, I do think there is enough there ‘there’ to show their motivations and actions are not just coming out of thin air but rather are affected by circumstance and experience.

Overall, I liked the film for what it was aiming to do. In many ways, it brought me back to my own college days (way back when) and my observations of the racial politics and how they operated (or not) on a major campus. In relating to the subject matter, I dare hope I was able to find deeper levels to the humor presented in the film.

Clearly the subject matter and content was something that folks at Sundance were clamoring for, as the buzz generated from the film meant I was seated in a packed house for the screening I attended. At the conclusion of the film, we were treated to a few words from the director and members of the cast during a post-screening Q&A.

Kudos to filmmaker Justin Simien for charging out of the gate with a film that tackles a provocative and timely topic while still managing to inform us AND make us laugh.

Image courtesy of the Sundance Institute