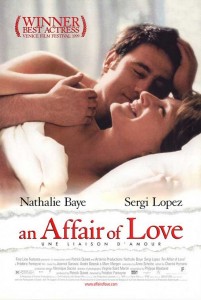 If you are in the NYC area you have until March 21st to view some great contemporary French imports.

Enjoy the long trailer below:

[Advisory: Near the end there is a subtitled bit of “strong” language].

8 Femmes was on Starz Comedy last night. I first saw this film several years ago. Although not a major purveyor of French cinema, I have been known to dabble a little in it. I approached this film with some curiosity as it is a musically-inclined film with a murder mystery at the center of it. The major selling from what I can only amateurly gather is that the “huit femmes” in the film are all very famous French actresses. I would say my knowledge of the majority of them is pretty okay (Ledoyen, Deneuve, Huppert, Darrieux, Sangier, Beart) if not limited to a handful of both French and English language films, but as a film fan I would not say my knowledge is neither extensive nor encyclopedic.

In a modern sensibility, this film can be seen equivalent to the soon to be released Nine, which features a dizzying amount of A-list talent.

Back to 8 Femmes – it did not disappoint. It was a fun musical comedy that was dramatic when it needed to be. I recommend anyone who likes musicals, and murder mysteries in the style of Clue take a gander at this film. It has an interesting (in a pleasing way) ending that is sure not to disappoint.

One year later, Ozon directed another French film that I liked that also was a  mystery at the heart of it, Swimming Pool. This film also feature Ms. Sangier in a lead role.