Rififi, the 1955 heist thriller, is a masterful piece of filmmaking an exemplary example of the film noir genre. Directed by blacklisted (and exiled) Hollywood filmmaker Jules Dassin (The Naked City, a personal fave) I imagine Rififi was made under great duress.

Before we go further, let’s talk plot. There are slight indications that ex-convict Tony, “le Stéphanois” (Jean Servais) desires a return to a life of relative normalcy. However, any notion of this quickly vanishes when his protégé Jo (Carl Möhner), for whom Tony took the rap for 5 years earlier, wants him to take part in a plan, devised by fellow gangster Mario (Robert Manuel), as what can only be described as “the perfect heist.” Initially reluctant, outside forces, most notably what I conclude to be a want to reengage former flame Mado (Marie Sabouret), conspire against him to the point that he concedes and agrees to join in on the burglary. Rounding out the team is Mario recruit and fellow countryman Cèsar (played by Dassin), as the safecracker. 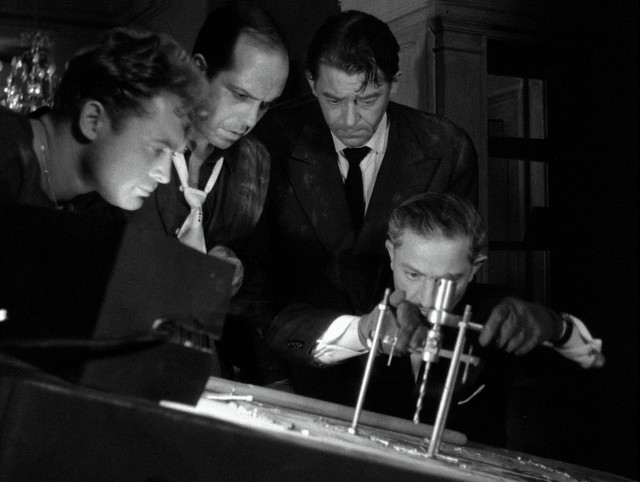 From this point in the film, I was taken in and remained on the edge of my seat. Sure, on its surface, the idea of watching a group of people plot out and plan something, anything, may sound like the cinematic equivalent of watching paint dry. Not here. With each passing moment and as the day of the burglary drew near, I became further and further invested not only in the outcome, but also in the characters themselves. So much so that until the end of the film, I was rooting for these guys to not only to succeed in their plot, but to also get away with it, unscathed (oh, dear).

Once we get there, the audience is served the pièce de résistance – a musical score-free 20-plus minute sequence showing the heist in action. Exquisite. Coming in a close second was the equally iconic denouement.

Major kudos to co-writers Dassin and René Wheeler, who adapted a problematic source fraught with overtly racist thematic elements, specifically in reference to the characterization of the story’s principal antagonists. An honorable mention goes to Dassin’s performance as Cesar – all of the director’s dialogue was spoken phonetically, since he did not actually speak French.

Hopefully this compilation piece will get you in the mood (sorry to my ‘Francophones’ out there for whom this clip may give away more than you desire):

In the end, through an expert level of skill and artistry, Dassin was able to put together a film that I feel should be on any film lover’s ‘must see’ list. It is often said that great pieces of work come out of a sense of urgency and desperation; with Rififi, you feel this in a sense and the results are sublime. I hope that you will all one day get to see this in all its big screen glory, by way of a newly remastered print (as we did).

For my first contribution to “Tuesday’s Overlooked Films,” I will take a brief look at one of my favorite films in the film noir genre, Jules Dassin’s The Naked City from 1948.

It is a hot summer night in the city that never sleeps. After glimpsing into the mundane activities of  New Yorkers from various walks of life at play, we see the shadowy figures of two men in the act of murdering a young woman; the young woman is later idenitified as a model named Jean Dexter. Soon after, an equally sinister scene is visited upon us – the disposal of one of murderers (obviously overcome with a sense of remorse) by the other.

As day breaks and the model’s body is discovered, the police investigation begins. The investigation is headed by veteran detective, Lt. Dan Muldoon (Barry Fitzgerald) and his young partner, Jimmy Halloran (Don Taylor).

What follows is a step-by-step procedural of the murder investigation. Along the way, we are introduced to a variety of characters, who together are key to identifying the persons responsible for young Jean’s demise.

Why I Love this Movie

From its outset, we are told that The Naked City is “a motion picture unlike any other that we have seen.” Of  the movies that I have seen in this genre, this film most ably combined the narrative of cinema with a very realistic portrayal of a post-war New York City.

This due mainly to the fact that the majority of the scenes were shot in various locations in and around New York City. This lends a “true-life” or documentarian feel to the film. At the time, the cinematopgraphy earned The Naked City several plaudits, including the Academy Award in 1949 for Best Cinematopgraphy.

I also love how, at times (especially in the beginning), the narrative is intercut with scenes of the city (and it people) as a living, breathing organism in which so many things are happening around the main story.

As for the narrative itself, while it may sound a bit mundane, the police procedural is actually quite gripping. The complexities of the people and places involved in the murder investigation is fascinating to watch.

Of course none of this would work if not for the solid writing, acting and directing.

The Naked City is indeed a city of “8 million stories” and we are given a glimpse of a very fascinating one indeed.