Home Archives for letter from an unknown woman

I was first made aware of Max Ophüls’ Letter from an Unknown Woman (1948) when it was featured in one of my favorite books specifically about the treatment of women in the movies – From Reverence to Rape (written by Molly Haskell). As a result of her analysis of the film, I made it a personal mission of mine to seek it.

In a nutshell, Letter from an Unknown Woman is a story of unrequited love and the desperation, obsession (and mania) that can follow. It stars one of my favorite actresses from the era; Joan Fontaine is in the central role of a girl who grows into a woman who cannot seem to let go of a supposed romantic attachment (Louis Jourdan) of her youth. This steadfastness and devotion is disastrous and leads to tragic consequences.

The films works for me on many levels but principally the visuals are what have always captivated me; Letter always had a mystical, dreamlike for me. 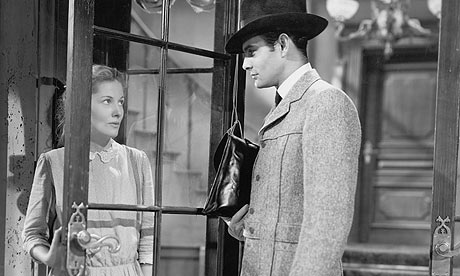 FUN FACT (primary source: Wikipedia): In doing my research for this post, I discovered that film ending an the book ending differ. While both endings are equally ambiguous, the latter leaves the reader with more questions than answers about the fate of our male protagonist. There are also a few other structural changes to the plot but overall this film still reveals itself as a tragic love story.

* the film is available on DVD but it looks a little hard to come by – you may have to do some digging around.

Must give a mention: Last week while I was making my rounds in the film blogo-sphere I visited M. Carter at the Movies (LINK UPDATED) where they have reviewed a film that I think is worth a look at. I too is a film that I do not feel like got much sunlight on it during its initial run.