After piquing my interest last year when it screened at the TCM Classic Film Festival, I decided to give When You Read This Letter (Quand tu liras cette lettre in French) a try during its 4K restoration tour of the country.

Released in 1953, When You Read This Letter is a French-Italian co-production directed by Jean-Pierre Melville and starring Philippe Lemaire, Juliette Gréco and Yvonne Sanson.

If I were to describe the genre, I would safely put in the realm of a drama or melodrama, although I have seen it also described as a noir.

END_OF_DOCUMENT_TOKEN_TO_BE_REPLACED

Last night/this morning, I tweeted my dismay at missing the Emotion Pictures: International Melodrama series presented by my friends at the Film Society of Lincoln Center.

It is a minor comfort to me, but a comfort none the less that the Film Society recorded a podcast where they take a closer look at this genre:

Among the films presented in this series is the 1956 Nicholas Ray feature Bigger Than Life, starring James Mason as a mild-mannered suburban schoolteacher whose life spirals out of control when he develops a debilitating addiction to a life saving drug.

As I have learned, the mechanics of the narrative arc of films such as these often escapes the confines of that narrative itself. By that I mean the story is able to serve as social commentary on what is going on around us. I have also learned, there is no more fertile ground for this type of exposé than Eishenhower’s America. In the wake of the postwar American prosperity, it appeared that there was a lot of our human interactions/behaviors that was either masked or marginalized, all in the effort to create a utopian landscape which was somehow a reflection of this progress and newly found wealth.

Of course, none of that “bad” stuff goes away, it simmers and eventually boils over (bursts even) for all to see.

Right after watching the film I immediately came to appreciate it in the way I appreciate and love the films of Douglas Sirk from this same period of time. Bigger Than Life, though not as commercially successful than these films, operates in the same wheelhouse. When you think about it, the lack of box office receipts makes total – Sirk’s high gloss, aspirational Technicolor-infused productions were more accessible to audiences, who could easily ignore some of the more biting commentary and enjoy on an entirely more superficial level.

Bigger Than Life, on the other hand, is a more incisive, deep cut to what is undoubtedly it’s companion piece – Ray’s previous feature Rebel Without a Cause. Both films clearly have something to say about the following two ideas: 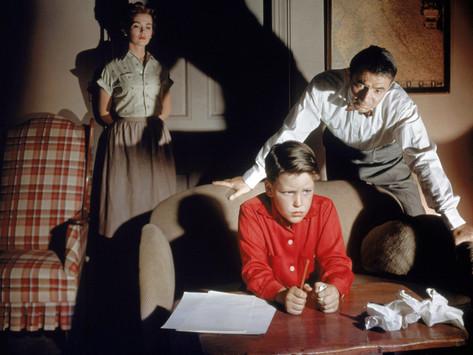 Bigger Than Life goes one step further and adds an additional layer with the oddly enough more accessible (at least for my eyes) topic about the damaging effects of seemingly benign therapeutic drugs when they are abused and misused.

in addition, the total package offers its audience a more visceral, realistic bent to how all these events play out; something not fully present in the James Dean icon-making vehicle Rebel Without a Cause.

But don’t take my word for it, this was a passion project for the film’s star, who also co-wrote and produced the film:

Bigger Than Life is available on DVD/BluRay (via the Criterion Collection).