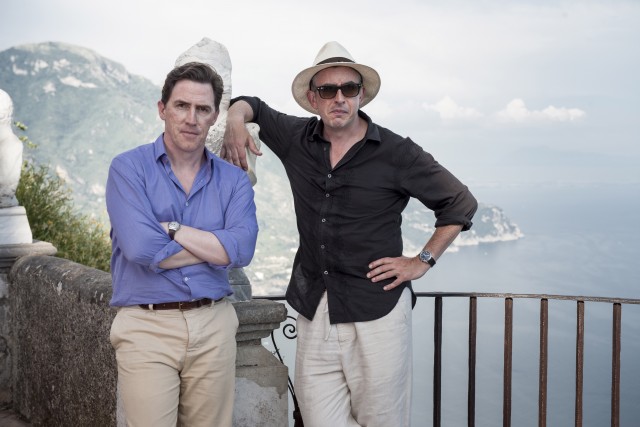 With The Trip to Italy, director Michael Winterbottom brings us back on the road with comedians Rob Brydon and Steve Coogan in his follow up to 2010’s The Trip, which saw Coogan and Brydon go on a similar tour of the tastes and sights of northern England.

Aesthetics and culinary convention aside, the banter between stars Rob Brydon and Steve Coogan seems almost effortless and will leave you in stitches. In fact during the Q&A that followed the screening I attended, Coogan and Brydon said a lot of what we see on screen was the result of taking the moment and seeing where it led, all while the camera was rolling.

But it is not all laughs and giggles as some of their life’s complications enter the mix. But they are handled quite well and offer a nice balance that contrasts all the laughs that are to be in the movie.

Although this narrative of The Trip to Italy involves a fictionalized version of the actors’ real lives, this parallel live portrayal of theme as public is always something fascinating to watch. I feel that it must be quite fun for a performer to play because it allows you to exaggerate or dampen those parts of yourself that you might want to suppress or express in your actual life.

As a member of the audience The Trip to Italy sure is a fun ride that is guaranteed to entertain, leave you hungry and make you want to go out and purchase Alanis Morisette’s Jagged Little Pill.

Photo Courtesy of The Sundance Institute