As much as I like classic cinema, the idea of watching an old movie on the big screen never really appealed to me for some reason. That was until I saw a re-mastered print of Alfred Hitchcock’s Vertigo when I was in college. Up until that time, I suppose I took for granted that at one time these were the films that drew audiences to movie houses, and not the CGI-special effects laden fare which we are currently accustomed to.

Here in New York City, many theaters and centers of film study have repertory film programs, such as the nonprofit Film Forum in Lower Manhattan.  These outlets provide audiences the opportunity to re-watch some of their favorite films in the way they were originally produced; in addition, this format has the potential to introduce a whole new audience to films they might not even have heard of.

This week I was informed of another film (a staple in our household growing up) that will get such a treatment – Monty Python and the Holy Grail is coming to the Landmark Sunshine Cinema. Like many films that get re-released for theatrical distribution, this is a re-mastered print, formatted for the latest hi-definition standards. In addition, patrons will be treated to a featurette, Terry Gilliam’s Lost Animations. 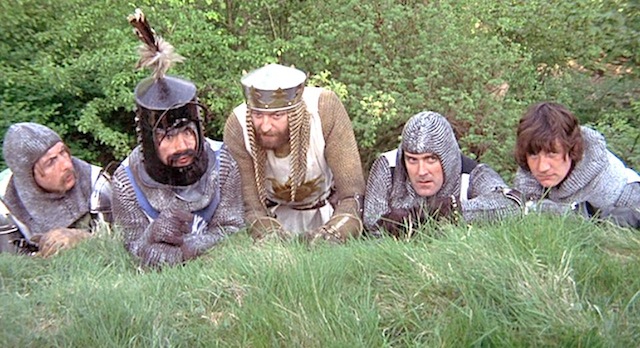 What are your feelings about seeing classic/restored prints of films on the big screen? Or are you content watching them at home?

* Monty Python and the Holy Grail will be playing at the Landmark Sunshine Cinema (143 East Houston Street, NYC) from Friday, March 30th through Thursday, April 5th 2012.