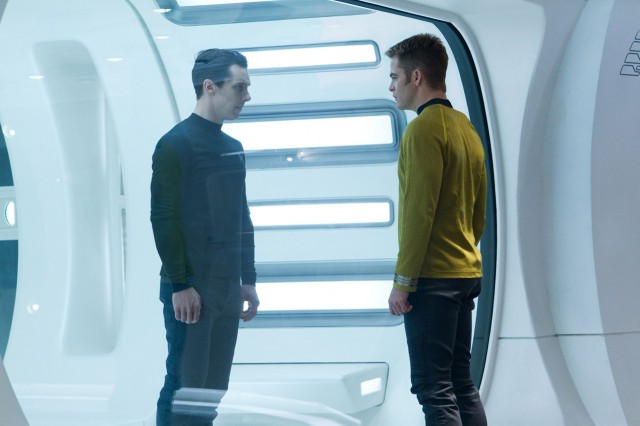 As I mentioned in an earlier post upon seeing the trailer for Star Trek Into Darkness, I was a bit concerned that the film would be too earnest for its own good. The trailer came off as dark and menacing. Not that these elements in of themselves are enough to turn me away from the movie theater doors, I was fearful that the sequel would lose some of the charm and whimsy that made the first movie a wonderful surprise.

I have no idea why I doubted JJ Abrams’ ability to make a sequel that is equal parts entertaining, funny and dramatic. In summary, Star Trek Into Darkness did NOT disappoint.

The action starts off with the USS Enterprise going on a mission that does not go quite as expected; the result being the demotion of our fearless/reckless Captain James T Kirk (Chris Pine). At the same time, there appears to be an imminent threat to the Star Fleet and it resources. The suspect is an enigmatic figure, one Jon Harrison (Benedict Cumberbatch). His actions set into motion circumstances that place the newly re-appointed Captain Kirk and his crew on a mission that has many twists and turns.

At the center of all the amazing action sequences and set pieces continues to be the relationships – principally the one between Kirk and Commander Spock (Zachary Quinto). While Kirk is all emotion, Spock seems to fight against his human nature for his own self-preservation, as he tells Kirk and Uhura (Zoë Saldana) in a very moving sequence. What you are left with is an intriguing picture of a friendship forged from the most unlikely duo. Even though most of us are familiar with the Kirk/Spock relationship from the TV series, Abrams’ take is so very touching.

Now to the principal villain. I do not want to spoil ANYTHING (I actually was blissfully ignorant as to who was what in the film), but the main villain that everyone is aware of is the always delightful to watch Benedict Cumberbatch. Let’s face it – that man has a face marked for villainy, especially of the urbane variety. That said what is haunting is the cold way in which he delivers his brutality.

Yeah I know I mentioned in my Iron Man 3 interview I bellyached about the IMAX 3D experience, so chances were I would not want to relive that experience a second time. But call me a glutton for punishment I went ahead and paid for the privilege. To add to my enjoyment for the evening, this was not a bad 3D experience. So while I may not 100% sold on 3D for cinema-going yet, it does seem like for those who are willing to part with a few extra dollars, you may want to part with it here.

In discussing the film after the fact – someone brought up an interesting point to me – while the Star Trek films have been fun to watch, the ‘campy’ references to the legendary TV show run the risk of wearing thin as future installments of the franchise are released. We know that the Star Trek universe has limitless story possibilities, so this is a great time to explore those narrative opportunities. I am SO here for all of that!

Have you seen Star Trek Into Darkness? Hit up the Comments section of my post!

In general for me at least, Benedict Cumberbatch is well worth the price of admission. And after the pleasant surprise which was the first installment of this rebooted film series, I think I will be seeing this one in the theater!
How about you? Share your comments below …