Home “The King of Comedy” to Close 2013 Tribeca Film Festival 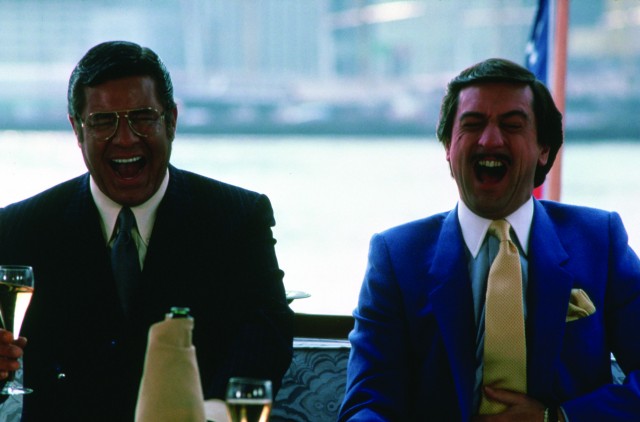 New York, NY – March 28, 2013 – The Tribeca Film Festival (TFF), presented by American Express, announced today that the 30th Anniversary of Martin Scorsese’s The King of Comedy, restored in association with The Film Foundation, Regency Enterprises and Twentieth Century Fox, will close its 12th edition on Saturday, April 27. Closing night will take place at BMCC Tribeca PAC. Tickets will be available to the public via tribecafilm.com.

The King of Comedy – directed by Martin Scorsese, written by Paul D. Zimmerman, produced by Arnon Milchan, and starring Robert De Niro, Jerry Lewis, Diahnne Abbott and Sandra Bernhard –was originally released in 1983. Lauded as “shockingly prescient” by Moviefone, the film is recognized for its groundbreaking foresight into reality-TV culture and lack of distinction between renown and notoriety. It also holds up as the finest dramatic work of Lewis’ career, one of Martin Scorsese’s most underrated movies and a darkly funny film that features Robert De Niro playing the scary and fascinating character, Rupert Pupkin.

The King of Comedy is being restored digitally in 4K from the original camera negatives at Sony Colorworks; John Polito at AudioMechanics is digitally restoring the soundtrack.

“Twelve years ago when we announced the first Festival, it was Marty’s idea for us to feature Restored and Rediscovered films. This year we are proud to close our 12th Festival with a restoration of his The King of Comedy,” said Jane Rosenthal, co-founder, Tribeca Film Festival. “The King of Comedy was so ahead of its time; it seems more relevant today than it was 30 years ago. We are so grateful to Jim Gianopulos and Regency for helping to restore such an iconic film and ensuring it remains a part of our cultural heritage.”

In this unforgettable film, a funny thing happens to talk show host Jerry Langford (Lewis) on his way to the studio. Kidnapped by stand-up comedian Rupert Pupkin (De Niro) and his wacky sidekick (Bernhard), Langford is forced to give Pupkin a shot at the big time by allowing the struggling comic to perform his routine on Langford’s show. What unfolds is an incredibly funny and poignant story about the darker side of comedy.

“I was a big fan of the script and was very excited to do it with Marty and happy that we finally made it. The fact that it’s been restored (hard to believe so many years have passed) is even all the better, and I can’t wait to see it on our closing night,” said Robert De Niro, co-founder, Tribeca Film Festival.

Scorsese said, “I’ve always been partial to comedians – the irreverence, the absurdity, the hostility, all the feelings under the surface – and to the old world of late night variety shows hosted by Steve Allen and Jack Paar and, of course, Johnny Carson, to the familiarity and the camaraderie between the guests. You had the feeling that they were there with you, in your living room. Robert De Niro and I were both drawn to Paul Zimmerman’s script for The King of Comedy, which really captured the show business atmosphere and the desperate attachments that some of the people on the other side of the screen could form, the ones that in certain cases turned dangerous.

“Making the picture was quite an experience. We had Sandra Bernhard in her debut. We had New York in summer. We had the beautiful Diahnne Abbott. We had all those wonderful guest stars like Tony Randall and Victor Borge and Ed Herlihy and Dr. Joyce Brothers, and the people who were really in the business, like Freddy De Cordova and Ed Scherick. We had my mother, and my father, and my daughter Cathy. We even had The Clash in a couple of shots, in the role of ‘street trash.’ And, we had a living legend, the great Jerry Lewis.

“I’m so happy that after all this time, The King of Comedy is finally getting a restoration, from our wonderful friends at Fox.”

Visit www.tribecafilm.com/festival for more information about TFF’s 2013 programs and the full line-up of films.