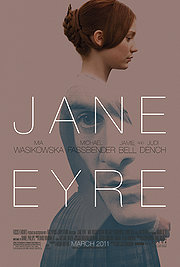 At the end of Jane Eyre, the house was burnt down by fire (set by Bertha) and Rochester ends up blind.

For me, this climatic “reveal” is about as shocking as the Titanic sinking at the end of Titanic. Yet somehow I found myself in an evening screening of Jane Eyre last night in NYC where upon the revelation that Thornfield Hall was destroyed by fire, the sold out audience let out a very audible and collective GASP. It took everything within my power not to let out a boisterous laughter. I was thinking, “really, did you NOT know what happened?”

Obviously, not everyone has read the source material by Charlotte Brontë – although for most people I know it was mandatory high school reading. The fact that the crowd demographic skewed older and likely from the UWS (Upper West Side), I assumed I was watching the movie with a semi-literate crowd. Maybe I am reading too much into this – maybe it is a credit to the movie that the spectacle of seeing a “great house” in fiery ruins really left an impact on the audience.

But I digress; this is the first movie I have seen in the theater this year! Wow – I really cannot believe that.  From early on I was really looking forward to seeing this adaptation, primarily because I am a fan of Michael Fassbender’s previous work and was curious to see how his portrayal of Edward Rochester would go over. In that I can say I was not surprised he did a very good job.

But for me the revelation was Mia Wasikowska – she was a FANTASTIC Jane. At the risk of sounding superfluous, I find it hard to express in words how much I liked her performance. She just seemed to embody an image of Jane Eyre that was defiant and at the same time vulnerable. It is  delicate balance that can often teeter one way or another but she manages it gracefully.

The adapted screenplay by Moira Buffini was quite impressive as well. Her words were able to breathe life and make more tangible for our modern sensibilities the feelings and frustrations that we all imagined the characters must have experienced on the page.  She was able to inject passions, romantic awakening and a real feeling of Jane/Rochester being 2 parts of 1 whole.

The one part of the novel that always gave me pause was in the latter half (SPOILER ALERT) when Jane runs away and finds herself in the company of St. John Rivers and her sisters. While I understood its purpose in the novel, I found it a bit frivolous. I found reading it to be a bit tedious.

In the film, Cary Fukunaga decided to play with the placement of this in the narrative – I really liked the result. This part I will not give away and will leave it up to you to decide how you like it.

How Many is Too Many?

An article in The New York Times last week seemed to pose the question: do we need another Jane Eyre adaptation? My response is a resounding “yes.” I have seen quite a few of the Jane Eyre adaptations in my day, notably the 1944 Joan Fontaine/Orson Welles film and 2007 BBC Miniseries (Ruth Wilson/Toby Stephens). Personally I will never tire of seeing this story which while of a particular time, is timeless in the theme of longing for love in a barren landscape (credit due to D/P Adriano Goldman).

One activity I have created for myself when watching a film adaptation is to play the “clock watching” game – in this game I am challenge the filmmaker to capture the spirit and essence of the film in an allotted time. This is easy to do in a more literal miniseries where the filmmaker has the luxury of extra time to draw out more elements of the story. But in a feature film you really have to work hard at compressing the story and still being able to capture the spirit and essence of the author’s words. Director Cary Fukunaga more than surpassed my expectations in this regard. I left the cinema feeling well satisfied.