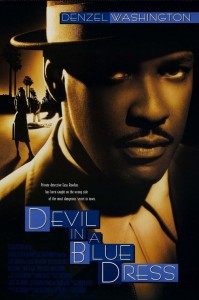 This week’s “overlooked” film is the 1995 neo-noir Devil in a Blue Dress. The film was directed by Carl Franklin and starred Denzel Washington, Jennifer Beals and in a scene stealing performance, Don Cheadle.

The film was based on author Walter Mosley’s  series of crime novels featuring the private detective, Easy Rollins.

The plot is straightforward – Easy (Washington) is a down on his luck WWII vet who has been enlisted to search for a missing woman (Beals).  Along the way he meets several characters and as with most noirs/crime dramas, nothing is what it appears and there are several twists and turns along the way.

The performances are all solid but as I previously mentioned, every moment Don Cheadle is on screen as “Mouse” is an entertaining moment indeed.

Cinematically I was transported to a 1940’s south central Los Angeles which differed greatly from what was (at the time) part of my cinematic experience with the area  (Colors, Boyz N The Hood, and the like). Devil in a Blue Dress was a slickly styled, well paced film from a skilled director who previously directed another film that flew under the radar, 1992’s One False Move.

To this day, I am still a little disappointed that we did not get another one (or more) films out of the Easy Rollins franchise.