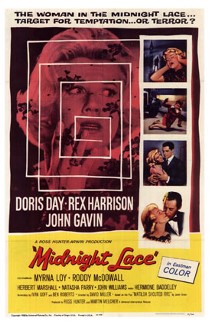 One reason why I like this film (and her in it) is that it is a departure into the realm of drama for her. For many audiences the mere mention of the name Doris Day conjures up images of a bubbly perky miss singing along and romancing Rock Hudson. But here in Midnight, she attempts to break that typecast. The result — the “All American Girl” goes abroad.

Midnight Lace‘s plot is pretty formulaic, with shades of Hitchcock, Gaslight and several other derivatives, but that does not make it any less entertaining. Kit Preston (Day) is a newly married woman living in London with her husband Tony (Rex Harrison). One of the early scenes tells us that all is not going well for Kit – in the midst of the London fog, a frightening voice calls out to her … with threats of her demise. Distraught, she goes to Tony, who attempts to reassure her that she should dismiss this encounter and “just relax.”

As you can imagine more strange “happenings” occur with an increasing level of frequency and menace, which is matched with Kit’s increasing paranoia. Throw into this scenario the appearance of a handsome stranger (a pretty wooden John Gavin – probably the one element I could do without) and nosy Aunt Bea (Myrna Loy, another personal favorite) and you have all the elements of a story that courses through several twists and turns with an ultimate payoff that may surprise many. For others, it may be a bit predictable, but I still think that is a film that if you have not seen, it is worth giving it a try.