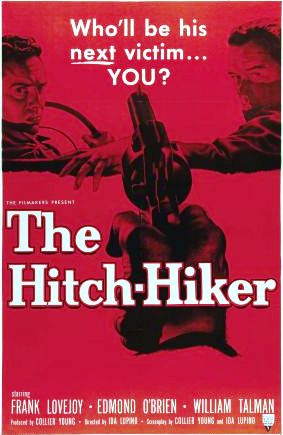 Chalk up another entry for Todd Mason’s ongoing blogging series, “Tuesday’s Overlooked Films.” This week’s selection is a classic noir from Anglo-American actress and (this time) DIRECTOR Ida Lupino.

As the opening sequences state, this film is based on a true story of two average guys, who pick up a mysterious hitch-hiker on their way to Mexico, where they a relaxing weekend of fishing. What they get unfortunately is something totally unexpected that puts their lives in imminent danger.

There may be some dispute as to whether or not this is the first film noir made by a woman; one thing is for certain: you cannot argue that this is one of the more solid offerings of the genre. As many noirs are, Hitch-Hiker is a low-budget B-film. So if you look at “bang for the buck” this film really delivers.

I also selected this film because for many filmgoers, they may not know who Ida Lupino is. She was born in the United Kingdom to a famous acting dynasty and studied at RADA. The silver screen came calling and she headed to Hollywood, where by my estimation her talent was on full display in films such as On Dangerous Ground, High Sierra and Road House. According to Wikipedia, for turning down a film role, she was placed on suspension which lead her to take a stab at directing.

As a director, the subject matter for his films was somewhat cutting edge for the time. Other films of note are The Bigamist, Hard Fast and Beautiful and Outrage.

Even if you are not interested or able to catch any of her films, I urge you to take a look at Ida Lupino simply as a biography and history of pioneers in cinema’s history.

One final note: in 1998, The Library of Congress of the United States’ National Film Registry seleted this film as cultural, historical or aesthetically significant.