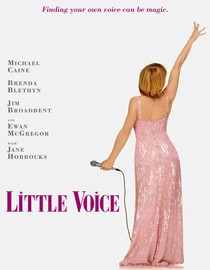 Little Voice is based on the stage play The Rise and Fall of Little Voice by Jim Cartwright, written and directed by Mark Herman.

It stars Jane Horrocks, Michael Caine, Brenda Blethyn, Jim Broadbent and Ewan McGregor. What amazed me about this film all those years ago was that I principally knew of Horrock’s work as the ditzy-headed Bubble in the classic Absolutely Fabulous. As a consequence I did not know she could sing, much less mimic classic lounge singers the way she did in this film. It was quite impressive.

Laura (Horrocks), known as Little Voice (LV for short) is a shy, retiring young woman who lives with her mom, Mari (Blethyn), but primarily keeps to her room, listening to records of singers of yesteryear – including Marilyn Monroe, Judy Garland and Marlene Dietrich. There is a sentimental attachment to the music as the records she plays are those of her beloved late father. In stark contrast, Mari treats her daughter with great indifference; most of her energies are focused on more amorous pursuits. In fact it is one of her recent conquests, Ray (Caine) who at once hears her magnificent voice and decides at once to exploit her talents for commercial gain. We then see her career’s fortunes rise and fall (as per the play’s original title). But do not be alarmed, it is a tender, sweet and ultimately triumphant story.

For those of you who do not mind a spoiler-ish scene from the film, there is a clip from the film that shows her full range on display available on YouTube.

According to ‘The WIKIPEDIA” the following songs were performed by Horrocks herself:

I think my personal  favorite scene is early on when Ray discovers that LV has pipes: