Home Reviews Girlhood (2014): Growing Up is Hard to Do

As Girlhood opens, we see Marieme (Karidja Touré) – she seems like your typical teenager. Almost immediately, this image is shattered – as we see her walking home to her housing development. Once we enter her house, it is clear that all not all is right.

So with a turbulent home life and less than stellar marks academically, she is left with limited options in terms of moving forward. At what can see if the possible unfortunate moment for her, she happens upon a group of girls who immediately interest her. It is then we are soon to discover she eventually takes up with the. They are a group of young women, led by one who calls herself ‘Lady’ (Assa Sylla). They are loud, boisterous and full of life. They eventually pull Mariem out of her shell; unfortunately, this newly discovered sense of self-worth is misdirected and starts Mariem on a downward spiral that sees her take up with some undesirable figures that are clearly operating outside of the law and who prey upon and exploit girls like Mariem, who by now has changed her name to “Vic.” 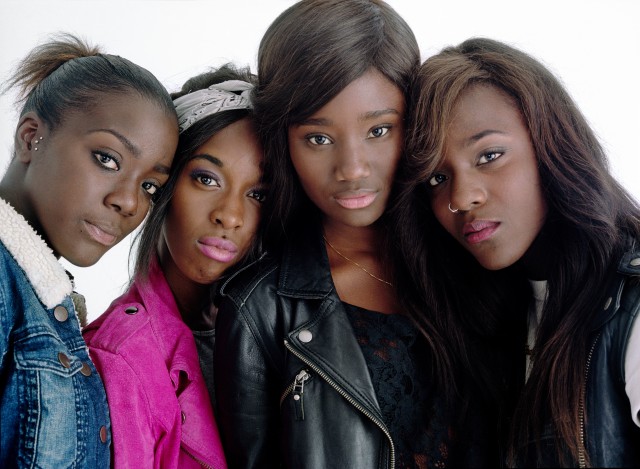 Girlhood seems to dip its toe in multiple waters – on the one hand, looking at, quite frankly, the criminality of some the girls’ actions, but then on the other hand, contextualizing it. It is clear to the viewer that Mariem/Vic is conflicted, but it is made almost understandable why she makes her choices and goes on the path that the film follows her on. As you know, I am not a huge fan of divulging too many plot points in my posts, so I will leave it to you to determine which scenes I might be referring you to.

One scene that I WILL discuss – because it resonated with me so much is one where, after stealing clothes and strong arming folks for money, the girls book a hotel room and commence to singing along to Rihanna’s “Diamonds in the Sky.” Not only is it a spirited, lighter moment, the combination of the singing and dancing takes on such a profound meaning – these girls, in spite of what they are doing or have done, want to feel beautiful, valued. I don’t know how else to explain really; I just feel like in that one moment, I got them.

All of this said, the film definitely has a voyeuristic look into Mariem’s coming into (or out of) her own. Not to say that this is a criticism of the film. In fact, this is something the writer/director Céline Sciamma, freely admits to. According to the press notes (yes they are read), she took to the task of developing this story as (I imagine) a social anthropologist would. She watched and observed the young women, in and around major meeting points in Paris. While that might sound a little cold and off-putting, much to Sciamma’s credit, she was able to take these observations and create a compelling, realistic story of one girl’s coming of age.
This of course, could not be accomplished without actors, who from what I have read, were selected from open casting calls. You will be impressed with the result.

For anyone not from France or unfamiliar with the socio-economic dynamics of how Mariem and others like her, live, largely due to the institutional and social constructs around them, this film may be an eye opener.

Don’t just take my word for it; as Sciamma eloquently states in her Director’s Statement:

Beyond their irresistible energy, their [the girls’] profiles reflect all the themes that are at the heart of my ongoing work as a filmmaker: the construction of a feminine identity within the framework of social pressure, restrictions and taboos, of which the question of plays on image and identity are central. It was my desire to continue working around the question of youth and initiatory narratives, but in a contemporary corollary, anchored in the political reality of France today.

These unique protagonists carry within them the promise of depicting a realistic portrait as well as the fictional dynamic necessary for narrative tension. Although the story is generational and very much rooted in French society, it also belongs to the realm of cinematic mythology: youth subjected to societal restrictions and taboos. It is a story that is better told in France today by the young women who were brought up in these poor minority areas.