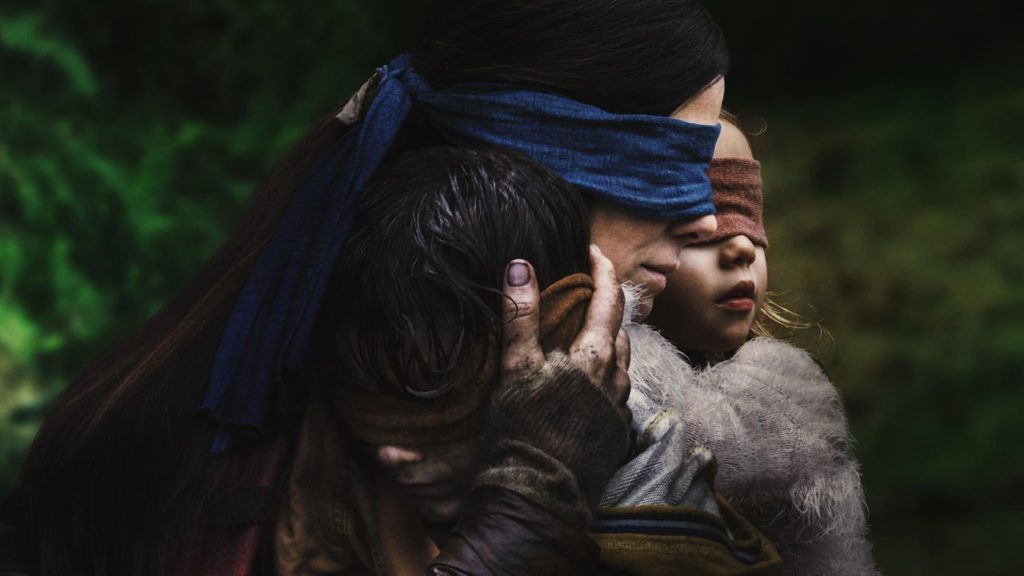 My overall impression is that Bird Box was an interesting premise hampered by a rather tame execution. What do I mean by this? For such a premise (an apocalypse brought on by an unseen “monster”) I wanted a little bit more. I really did brace myself for the film “going there” at any point … but alas, it never did. It felt like there was something holding it back. Do not get me wrong – I really liked the setup to the “endgame” as presented in the opening act, but I just wished that it was sustained for the duration of the movie’s 124 running time.

For the most part, the characterizations felt a bit cookie-cutter. Many of their actions and motivations were predictable from miles away. Personally, there was not a whole lot of surprises when certain characters acted in a certain way or met with particular fates. And with the exception of Sarah Paulson (as Bullock’s supportive sister), I was unable to really connect with or attach my emotions to any of them. But on the flip, points for the casting of such a diverse group of actors – I just wish more was done with them.

Typically, I try to steer clear of reviews or opinions of others for fear it may influence my own perspective. But due to the buzz Bird Box received on social media, I could not help but read a couple of “hot takes.” The ending in particular seemed to generate a lot of strong reactions. Strangely enough for me, when it came to it, I think that was the most satisfying aspect of the film for me. As I watched the film and started putting the pieces together, I do not think that there was any other way for it to end. That is without it leaving me completely curled up in a corner of my living room bawling.

But in the Book

Tied to the prior observation, some of what I picked up over the course of the film seemed centered on not just the immediate (world ending) but also to the impact of events on the main character and the emotional journey she is on with her two children. In retrospect, I do not know why this would surprise me – most stories that deal with external forces wreaking havoc on our protagonists are more about their internal struggle and personal growth. In any regards, it was noted, but I get the sense that something like this would resonate more in the source material.

So, as you can see, my overall reaction to Bird Box was a bit “meh.” I think this is one film that is easily categorized as an “I do not love, but I also do not hate it.” The convenience of it being on Netflix means that it was not a total complete time suck.

Are you among the 45 (+) million viewers who streamed Bird Box/or caught it during its limited cinema run? What did you think? Let me know in the comments section below.