When I initially endeavored to cover La Belle et la Bête (2014) I thought it would be a great idea to watch the Jean Cocteau 1946 version as a companion piece. Alas, that never happened – because – life. I would say based on this viewing, I am determined to eventually give it a look. But for now, I’ll stick to reviewing this version.

First a little background. I definitely have a mixed history with the story of Beauty and the Beast as both a source material and an adaptation.  While I have not seen the Disney animated ‘masterpiece’ from 1991, I was more familiar with the late 1980s television version featuring Ron Perlman and Linda Hamilton. Sadly I am old and remember it well. All this to say, that, I generally thought I knew the basics of the story; in other words, I knew enough to get by and not be surprised by the lack of singing candelabras or tea cups.

Or rather, I THOUGHT I knew. As I tucked in and watched this French language version, directed by Christophe Gans and starring Léa Sedyoux and Vincent Cassel (they of the title respectively), I found myself post-screening having to do some additional research about the 1740 story as told by French novelist Gabrielle-Suzanne Barbot de Villeneuve (later abridged by Jeanne-Marie Leprince de Beaumont in 1756). 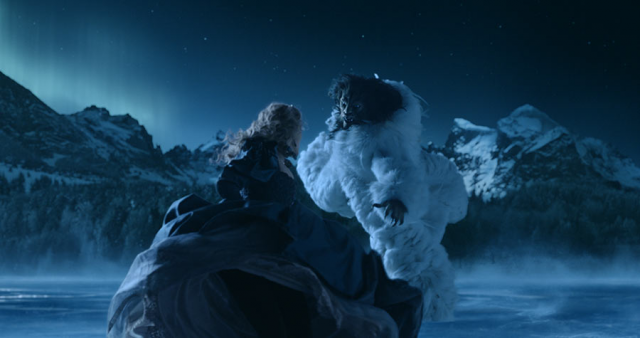 In fact, let me go ahead and share with you (who may also be similarly uninitiated) the film synopsis which will adequately set the stage for the story:

The year is 1810. After the wreck of his ships, a financially-ruined merchant (André Dussollier) exiles himself in the countryside with his six children. Among them is Belle (the “beauty”), his youngest daughter.

One day, during an arduous journey, the merchant stumbles across the magical domain of the Beast (Vincent Cassel), who sentences him to death for stealing a rose.

Feeling responsible for the terrible fate which has befallen her family, Belle decides to sacrifice herself and take her father’s place. At the Beast’s castle, it is not death that awaits Belle, but a strange life in which fantastical moments mingle with gaiety and melancholy.

They learn about each other, taming one another like two strangers who are total opposites.

As for the film itself, credit to the director, cinematographer and the set design/visual effects teams. They really created a stunning and mystical landscape that seemed to be lifted straight from the imagination of a person reading the fairytale. The visual style was so enthralling that I was engaged all the way through. The live action blended seamlessly with the CG. Sure I knew it was CG, but that is a concession I was willing to make in allowing the film to push the limits of projecting an otherworldly fairyland onto the screen.

That said, once I got past the reverie, I did feel like there were issues with the plotting of the story. In spite of the fact of my prior knowledge that Belle (“Beauty”) would eventually fall in love with the “Beast,” the film did the bare minimum (and possibly less than that) to convince me of the progression of Belle’s feelings.

I also get the sense that there was an effort to convey a sense of gritty realism in the tale at particular moments. In general, this felt a little incongruous to my sensibilities and the initial escapism and whimsy conveyed by the images I saw on screen. But then again, maybe I should remember my literary history and that the origins of fairytales often were not filled with an unending stream of sunshine, rainbows and magic.

Although the film was produced in 2014 and premiered at the 64th Berlin International Film Festival, La Belle et la Bête is finally getting an American release.

Starting today, check the official website for showtimes (http://beautyandthebeastfilm.com/) in select markets around the country.