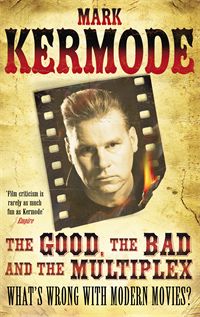 This Thursday, I decided to change things up a bit and discuss my most recent accomplishment: FINALLY completing a book.

Over the past week, the voice in my head has been that of esteemed British film critic Mark Kermode.

As any regular listener to the program he and Simon Mayo co-present on BBC’s Radio 5 knows, Mark is a man of very marked opinions. For those you who are not familiar with The Good Doctor, I refer you to his BBC Blog and his and Simon Mayo’s Radio Show website, where you can subscribe to and download their weekly podcasts.

In his most recent book, The Good, the Bad and the Multiplex: What’s Wrong with Modern Movies?, he has the opportunity to go on a series of no-holds-barred rants about what he feels is wrong in behind the scenes of today’s Hollywood films. In his book he waxes poetic about:

Although I have heard many of these arguments, in the full expanse of the written word, Kermode’s stories take on another dimension. He backs up many of his arguments with a combination of hilarious, unbelievable personal anecdotes and some well-researched data. And you may not totally agree with his positions, but he gets props in my book for calling out some of the unspoken things many of us are probably are wondering. The one that sticks out in my head is: If blockbusters make money no matter what (including poor critical response), why make crappy ones? It is the classic Transformers vs. Inception argument.

This is Dr. K.’s second book; his first book It’s Only a Movie is also on my bookshelf and yet to be read. I promise to get to it … eventually.

For my readers in the UK, stay tuned for Kermode’s announcement of the annual Kermode Awards; for the uninitiated, these are posited as an “alternative Academy Award.” Previous winners of the award include Andy Serkis, Andrew Garfield, Christopher Nolan, Kristin Scott Thomas, David Cronenberg and this guy.

In keeping with the previous “borrowed” blog post (Denzel Venn Diagram), this next posting is also borrowed from another source. It is none other than one of m favorite film critics, Mark Kermode espousing the virtues of the work of the Hughes Brothers, who have made films such as Menace II Society, From Hell and the film at the central thesis of Mr. Kermode’s blog post, Dead Presidents which technically I should add to my “On Location” feature since some of it was shot in Westchester County and the Bronx.

In the film community there has been a lot of talk surrounding the future of 3D in cinemas. A favorite film critic of mine, BBC’s Mark Kermode, has talked at great length about 3D and the issue of piracy. I have embedded one of his video blogs that discusses that very problem:

Meanwhile I had the pleasure last weekend of seeing the sixth installment of the Harry Potter film series (Half Blood Prince or HBP) in IMAX 3D. The Lincoln Center cinema was one of a handful of theatres nationwide showing HBP in IMAX ahead of the July 29th nationwide release in this format (click here to find out why).

I will spare you an actual review of HBP since I am an unapologetic devotee of both the books and the movies. I will however comment on the “IMAX 3-D” experience. Simply stated the best experience for me was watching the trailer for the Disney IMAX 3D version of A Christmas Carol, starring Jim Carrey.

As far as the feature presentation goes, the 3D was reserved for the first twenty minutes. Wow! There was a lot of deatheater flying, and swooping down alleys, across bridges and in narrow alleyways. The result left me a little light headed. For my movie-going companions, the experience was a bit more extreme; the experience bordered on nausea. At first, I thought it was just me but was I glad to find out I was not the only one.

At the end of the twenty minutes, I was more than happy to take off my 3D glasses at the prompting of the flashing of the red glasses on the cinema screen. The whole process of being instructed to do something in a movie theatre was a little disconcerting.

Another observation is that in a few scenes there was a weird ghostly/shadowy thing going on. Maybe it was just the print (hmm?).

My conclusion? Just give the IMAX experience if you want to get me excited about going to the movies – 3D is for the birds.