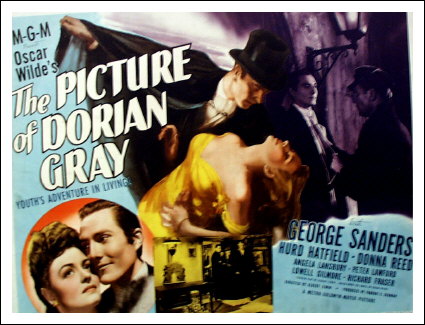 1945’s  Picture of Dorian Gray is a fascinating and at times, a disturbing watch for me. As someone who considers herself a rather unflappable mature adult, I still shudder a little at the suggestion that a painting (the original being haunting enough in its own right) manifesting and representing the depravity of a human soul at waste. But it is not the extreme end result that troubles me; the most unsettling phase is the subtle change Dorian (Hurd Hatfield) notices in the painting following his brief mourning of Sibyl Vain (a 19-year old Angela Lansbury in an Oscar-nominated role).

While I have not read the source material, another popular culture reference from television made me seek this film out. The late Ted Knight had a sitcom in the 1980’s called “Too Close for Comfort.” An episode aired that at the time, my 9-10 year old mind could not wrap my head around but I knew enough to feel a bit unsettled. In the episode (or what I vaguely remember about it), Ted was feeling guilty about something and this guilt manifested in his portrait, much in the way Dorian’s portrait would alter with each act of moral decay. On the television show, I believe the portrait went a step further and even spoke to Ted – creepy stuff indeed. Anyway, for some reason that image resonated with me and stuck with me long before I fully knew who Oscar Wilde or Dorian Gray were.

With this frame of reference, I have seen this film at least 2 or 3 times and it still works for me on the levels that I would anticipate it would and should. While there are a few deviations from Wilde’s text, the one element that does not fit at times is the inclusion of Donna Reed’s character as Dorian’s love interest (niece of the portrait painter) and possible key to redemption/salvation. Apparently in the text, this person is represented by a vicar’s daughter who Dorian romances near the end of the novel.

What really propels this film is the story. As previously mentioned, the external representation of a lost soul, is a powerful concept. This really got me thinking about if this were possible, how would people react? Would they do as Dorian does or will they look at this power as an opportunity to represent the best in their (and human) nature.

I am pretty sure that is what is exactly what the author Oscar Wilde wanted us to start to think about. There are so many other ideas related to youth and beauty, hedonism, Faust, etc. that I cannot easily or succinctly list them here; for additional references I refer you to the SparkNotes entry for the book.

This list, extracted from Wikipedia, is a comprehensive and chronological collection of other films adaptations for Dorian Gray; for my edification, I may catch the 2009 version starring Ben Barnes and Colin Firth as Lord Henry, the individual catalyst in Dorian downward spiral.