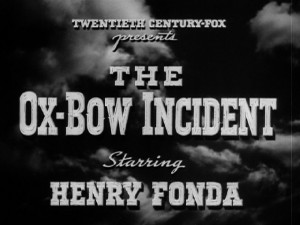 This weekend I was reminded about what a film, simple film Appaloosa is. The plot synopsis is simple enough – two lawmen (Viggo Mortensen, Ed Harris) are protecting a town from the corrupting force of a rancher (Jeremy Irons). Add a little spice in the female form of Renee Zellwegger and you have a motion picture that instantly reminds me of Saturday morning Westerns, that were predominantly produced during the 1940’s and 1950’s.  Of course the elements and violence have been updated to suit modern sensibilities, but does not distract the viewer from the core plot. Appaloosa‘s primary themes were of friendship, love and sacrifice. The presentation is very unfussy and beautifully shot.

Generally I do not consider myself a great fan of westerns; in fact many of the westerns that I like (The Ox Bow Incident [1943], Unforgiven [1992], The Searchers [1956] and High Noon [1952]), use the western setting as a storytelling device to inform its audience of aspects of the human condition. I suspect if I am to study the genre at length, I would find many more examples of “Western as Allegory” than I initially envisioned.

Appaloosa is currently running on all the HBO Channels.