Home Commentary While the City Sleeps by Fritz Lang 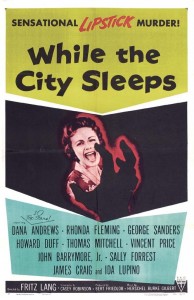 Over the years I have watch many films from auteur Fritz Lang including:

I am also looking forward to November 7th. On this date Turner Classic Movies will be showing a restored version of Lang’s visionary Metropolis. It will be my first time seeing it! I am really excited.

One film that has flown below my “noir-radar” is his 1956 film While the City Sleeps. It is a really effective crime drama about the hunt for “The Lipstick Killer.” It is really engaging and the suspense kept me on the edge of my seat. This is another film of Lang’s that casts a noir favorite, Dana Andrews as one of the main protagonists. As someone mentioned in the comments field of the you tube clip I have included on this post, a depressing side note this film is that it is painfully obvious that Dana Andrews is likely “worse for wear” in many of the scenes as indicated by the inflection of his speech.

All this aside, I hope that more people see the film because it is a really good watch.