As many of my readers have gathered from many of my posts, I am almost equally as passionate about travel as I am about cinema. On several occasions I have attempted to marry the two loves of my life in a set of featured articles tagged as On Location.

This month, I spent a balmy Saturday afternoon in the borough of Brooklyn, NYC. It was all part of an excursion put on by a touring company aptly named On Location Tours.

Founded in 1999 by Georgette Blau, On Location Tours has grown to become one of the largest media orientated tour operators in the world!

According to the press kit, On Location Tours is:

“… a one-of-a kind sightseeing company specializing in TV and movie location tours, brings fans closer to their favorite on-screen characters. The company’s stated mission is “to create tours that allow people to straddle the border between fiction and reality, letting them feel as though they are part of the show, ultimately bringing them closer to the characters and TV history itself.”

A visit to their website, http://www.screentours.com, reveals a variety of options of tours:

And if you find yourself in Boston, you can book a Boston TV and Movie Sites tour!

For my trial run I decided to on the Brooklyn TV & Movie Sites Bus Tour. The tour originated in Manhattan and focused mostly in the area of downtown and Northern Brooklyn – DUMBO (aka, Down under Manhattan Bridge Overpass), Boernum Heights, Brooklyn Heights, Park Slope, etc.

The tour was an informative, entertaining exploration into this eclectic and diverse borough and its place in film history.

At the start of our three-hour-tour, we made stops at Junior’s (Sex and the City), the coffee shop (now named Marybelle’s) where Nic Cage’s character works in Moonstruck, and the dock in DUMBO – a site featured in several films, including Coming to America, What Happens in Vegas, and Two for the Money.

We also made passing stops by a bookstore featured in Eat, Pray Love, the firehouse featured in I Now Pronounce You Chuck and Larry and, notably, the Hotel St. George, which was seen in The Godfather.

As we travelled from place to place, we received on-board entertainment in the form of video clips from the places featured along the tour route. As an added treat (and surely to keep our blood sugar up) we each received a piece of Junior’s cheesecake.  Do not fret: each tour has a similarly themed “treat” that its participants receive. I suspect, however, that on the Brooklyn tour, we fared the best! 🙂 And sorry there is no photo of the actual cheesecake … it was inhaled.

From our tour guide, we learned that Brooklyn has also stood in for other cities/locales – Boston (The Departed), Georgetown, Washington, D.C. (Burn After Reading), New England (Mona Lisa Smile) and even Paris, France (in Julie and Julia).

I have not even mentioned the ‘small screen’ (television) portion of our tour. Allow me o do so now. We learned about the various television shows that film in part or in whole in Brooklyn (Bored to Death, White Collar, 30 Rock, etc.).

One interesting factoid: while The Cosby Show was filmed in a studio in Brooklyn (and later, Queens), the exterior shot of the iconic “Huxtable Brownstone” was in fact of a home over the bridge in Manhattan’s West Village.

Our last major stop was a drive-by of the largest film production studio outside of Hollywood – Steiner Studios – on the site of the historic Brooklyn Navy Yard. 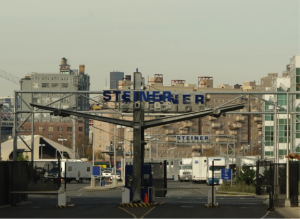 As the day wound down and we crossed the Manhattan Bridge on our way back to lower Manhattan, we reflected on all the sights that we have seen; it surely gave me anew, interesting and different perspective of the borough.

If any of you get the opportunity, I recommend that you seek out these types of tours, no matter the city you live in. I have lived in the greater New York area for the majority of my life and a lot of the information I received on this tour was new to me. And of course, when you are New York City or Boston, check out On Location Tours.

One last thing, for anyone who is interested in booking any of On Location Tours’ tours, you can go to their site and enter the following code, LUVCINEMA10, to receive an exclusive, 10% discount on your booking.

* Note: if you are to take any of the tours mentioned, the stops may vary.