It has been a crazy few weeks – that much is certain. Last week, saw me return from California and attempt to get back to my daily grind. Now that I am bit refreshed, I have had the opportunity to reflect on all the cinematic goodies which I have experienced over the past month. This includes the main subject of this post – my experience at this year’s Tribeca Film Festival.

Due to an overlap with the TCM Festival during Tribeca’s second week, I was only able to catch 4 film. That meant my Tribeca weekend featured a Saturday/Sunday double bill.

Let’s start with the screenings on Saturday, shall we?

A film about theater folk, adapted and directed by award-winning theater folk (Stephen Karam and Michael Mayer respectively), The Seagull features a stellar collection of talent (cast included Saoirse Ronan, Annette Bening, Corey Stoll and Elisabeth Moss) based on the Anton Chekhov’s play of the same name. First things first – I have never read anything from the playwright Anton Chekhov. This basically means I attended the screening not from the perspective of one who is looking at this production as an adaptation, but rather as a moviegoer. At the end of the day, this leads to one big question – Was it effective? 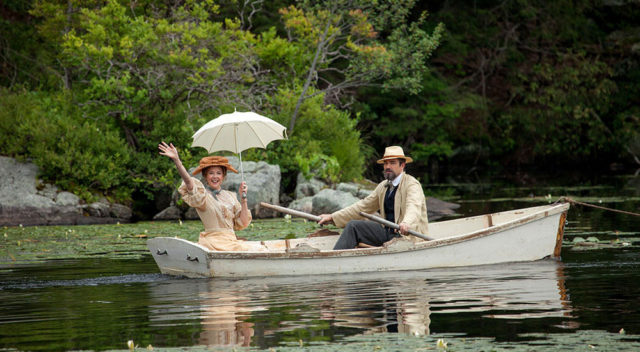 My overall feelings were rather mixed, leaning towards the positive. The story was engaging with many moments of bemusement. Standouts among the cast were Bening (because of course) and Elisabeth Moss in the supporting role of Masha. The latter’s performance of a woman with shall we say “overwrought emotions” registered quite well on my personal laugh-o-meter. Darker, more tragic overtones countered the light comedic moments. In this regard, I must concede this aspect of the film was not as emotionally resonant for me.

Side thought: I would be curious to elicit the reaction of someone who has read the play and what they think of the film… and you are one of the curious who happen to live in New York or Los Angeles, The Seagull opens tomorrow (May 11th) in limited release.

I rounded out my first day at Tribeca by watching Zoe. Léa Seydoux and Ewan McGregor headline this tale set in a very recognizable future world, where technology has “perfected” finding romantic partners for people seeking human connection. So advanced is this technology that the inhabitants of this world are now able to interact and engage with “synthetics” – which are, as the name indicates, not actually human, but are designed to be the “ideal” partners for whoever decides to get one.

As you can probably guess, there are a several developments in story which are ultimately designed to get the audience to explore the age old questions of: What does it mean to love? What does it mean to love in an advanced digital age/world of artificial intelligence? Can you find true love in this context? Why is romantic human contact so important (besides the evolutionary imperative)? Clearly, I can go on…

In spite of the aims of the narrative, I was left the screening feeling rather empty. For one thing, the end (no spoilers) felt rather predictable, making Zoe a rather shallow exploration into the world of the sci-fi human interest/love genre. In the end, I just did not care about anyone’s romantic outcomes.

If you are looking for more of a balance in your “Love in a Time of Tech” story, flip through wherever you access your film library and pull up Spike Jonze’s Her (2013). Even with what I assume is a bigger budget, Her still felt a bit more intimate and personal than Zoe; it had a warmth to it notably absent in Zoe.