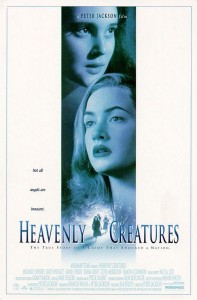 On the back of yesterday’s post regarding reading The Hobbit, I decided to take another look at Peter Jackson’s back catalog. Buried deep within the archives of this blog, I have mentioned my “video pick of the day” on more than one occasion but I have not really discussed it at length. Allow me the opportunity to do so now.

For those who may not know, prior to Mr. Jackson’s journeys to Middle Earth, he cut his teeth on comedy-horror films. Since horror is not really a favored genre of mine, I cannot speak too much to many of those films; the noted exception is my passing familiarity with 1999’s The Frighteners (mainly because it features a several American actors including Michael J. Fox).

However 5 years prior to the release of The Frighteners, Mr. Jackson made what I consider at once one of the most visually arresting, terrifying and imaginative films of the past 20 years – Heavenly Creatures. Release in 1994, the film starred a then 18 year old Kate Winlset and (a severely underused) Melanie Lynskey in the title roles of girls who, in real life found themselves at the center of a horrific murder case in 1950s New Zealand.

Thanks to some outstanding visual effects, I as the viewer, really felt like I escaped into the exuberant and disturbing minds of Juliet Hulme (Winslet) and Pauline Parker (Lynskey). My favorite visual sequence features “Orson Wells” as Harry Lime in The Third Man – another favorite film of mine.

The film was critically acclaimed and featured on many a “Top of the Year” lists in 1994.

Of course for many the Lord of the Rings trilogy is the starting point of Peter Jackson’s career in film. But as the saying goes – no success is overnight. At times like this, I think it is always a good idea to revisit the earlier part of an auteur’s filmography. In Heavenly Creatures, the fantastic, and at times terrifying world awaits us.  This is partly where Middle Earth began, if only on a (slightly) smaller budget.