Home Archives for the quiet man 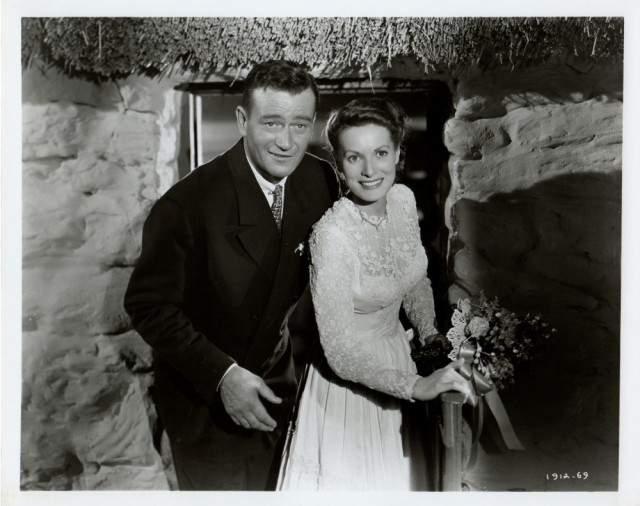 Hope everyone had a joyful ♣ St. Patrick’s Day ♣ and a great weekend. Mine was spent catching up on Game of Thrones (just in time for the season 3 premier), going to the Metropolitan Museum of Art (and getting stuck in post-parade revelry).

Sunday night, however was spent tucking into that blanket known as Turner Classic Movies for at least a bit of their selection of Irish-themed films. You can imagine my (semi) pleasure when I realized I had just caught the beginning of John Ford’s homecoming of sorts, the 1952 Technicolor feature The Quiet Man starring his go-to guy, John Wayne, with Maureen O’Hara, Victor McLaglen, Mildred Natwick and the always entertaining Barry Fitzgerald rounding a solid cast.

Sean Thornton (John Wayne) has returned from America to reclaim his Irish homestead and escape his past. Sean’s eye is caught by Mary Kate Danaher (Maureen O’Hara), a beautiful but poor maiden, and younger sister of ill-tempered “Red” Will Danaher (Victor McLaglen). The riotous relationship that forms between Sean and Mary Kate, punctuated by Will’s pugnacious attempts to keep them apart, form the main plot, with Sean’s past as the dark undercurrent. (Source: IMDB)

Now I must personally state for the record, that I grew up in a rather anti-Wayne household. Well maybe that may be a bit harsh – my dad was ambivalent at best and my mom could give a care about him. That said, as a classic film buff I (slightly) broke away from the family line and decided to see and judge for myself what I though of Mr. Wayne’s oeuvre.

The result? While I must admit that the ambivalence has translated down the generation, I do give Wayne props for his performance in the western he made with Ford four years after this film, The Searchers.

But I digress. The question of this post is What did I think of The Quiet Man?

Overall, I would say it was an enjoyable watch. The film balanced romance, comedy and drama very effectively and I cannot imagine a more sublime way of capturing the Emerald Isle than in the vibrancy of Technicolor. Honestly that was enough to pass the sniff test for me.

Now on to the acting. As I implied above, I am quite the fan of Barry Fitzgerald and love his screen presence; in this film my response is no different. Maureen O’Hara was solid as the fiery redhead who captures our hero’s heart. As for the main man himself, he does what he needs to make the performance convincing – enough so that it carried me through to the end.

It should also be noted that this film was a departure for Ford and Wayne, who, in case you didn’t know, primarily collaborated on Westerns. The Quiet Man was released by independent studio Republic Pictures, mostly known for it B-movie offerings. Due to the success of the picture, it garnered the studio its only “Best Picture” nomination in its history.

The one thing I did not see coming was the motivation for Sean Thornton’s desire to retire to a quiet, country life – packed quite a punch IMO (Note to self: the clue is in the title).

Have you seen this film? And what did you think of it? Submit in the Comments section below.